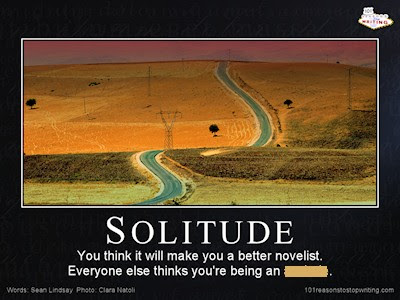 [Image from 101 Reasons to Stop Writing. I'll let you guess what the censored word is.]

Another happy hobbitish adventure: Hiking to the top of Sauk Mountain on Saturday. That might sound like a solo or small-group pursuit, but I went with five other adults and four children.

Despite the number of us, it did turn out to be an introverty sort of get-together. Navigating the narrow, rocky trail took a lot of concentration and most of us adults were of the quiet sort, so conversation happened with reasonable rarity, and... okay, confession time: I began by pretending I was Heidi from Johanna Spyri's novel, until the difference between my legs and a hardy Swiss eight-year-old's became too much for my imagination, at which point Anna was so kind as to reference Tolkien. After that I was an Elf. Yes, I still play those games, and the small boy who kept running into me on his imaginary scooter along the down-climb was going my speed, as it were.

The scenery helped. Though I had doubted the power of the view to compensate for the time and effort invested, the drifting fog, the deep blue mountain-lake and the steep, lush hillside absolutely captivated me. It felt very removed from the world, very elfy. Plus, the granola bars Will handed around at the top had a flavor much like what I would expect from lembas. (Nature's Valley, Roasted Almond. Very good.)

What does all this have to do with writing? Well, for starters, we writers are mostly a bit nuts. But perhaps that's not new information. For seconds, then, writing is something of a solitary pursuit, and it's amazing how possible solitude is around other people. For thirds, getting into the mind of a very different creature from myself—while not necessarily writing, in the sense of putting words together, is working an important part of the writing faculty. For fourths: even as an Elf, I had two different novels and a blog intermittently borrowing parts of my brain.

Mr. Pond's post last Wednesday talks of the fact that, nice as it is in theory to take breaks from writing, we never really do:

"Writing is a way of life. It’s a way of thinking. We can’t really take breaks from being ourselves, at least not without grave epistemological implications. The process of writing can be nearly continuous. Our subconscious—or, worse, our dream consciousness—continues to create, to explore, to develop, to rephrase."

He's right. We can never fully turn off that part of our brain, and sometimes writing happens in awkward places. Someone speaks to me, and it takes me half a minute to realize they're talking and by then I've missed half of what they had to say. I'm lying in bed with the light off, supposedly drifting into dreamland or praying, but I have more ideas for that beautiful dadburn story than I've had in three weeks and I just. can't. stop. I'm with friends, having a perfectly good time being inattentive to anything but my own head, and if the above demotivator is right, I'm a... well, you know.

There is something to be said for putting aside one's own drifty-headedness and behaving according to social rules. There is also something to be said for the fact that Instant Solitude Anytime Anyplace is an integral part of the way some of us are made. God help us helpless nutty writer-humans trying to work out that there is a time for being absent and a time for being present.

Most of us don't mean to be horrible. I don't even know that most of us think it will make us better writers. Perhaps most of us just can't quite help it.

As an Elf, I forgot Twitter and cell phones and paved roads and the fact that normally I don't care much for the cold and the damp. The beautiful green mountainside with its autumn-red huckleberry bushes and marmots and the secret lake that was clear enough to see right to the bottom from hundreds of feet above it—that was home. I walked a little straighter than I might have, bore the family knee curse as best I could, and let the silence and beauty cast their strong healing spells on my mind. The chorus of Enya's "May it Be", with its Quenya lines, ran through my head. And I realized that I will never write anything more beautiful than Tolkien's Elves with their languages and mythology and immortal consciousness and sorrow—and I was all right with that. The creation of beauty is an art learned from the masters, and shooting at stars is every writer's work.

At any rate: Next time one of your writer-friends vanishes into abstraction when you're trying to talk to him, pardon his weakness and feel free to call him into the present reality. Don't take his rudeness personally. Worlds cross paths at odd times and places for us, and getting lost in another world is sometimes our way of getting found.
Posted by Jenna St. Hilaire at 4:58 PM