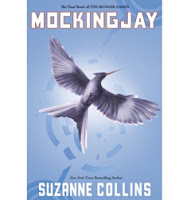 "As bad as it makes you feel, you're going to have to do some killing, because in the arena, you only get one wish. And it's very costly."

"It costs your life," says Caesar.

"Oh, no. It costs a lot more than your life. To murder innocent people?" says Peeta. "It costs everything you are."

Synopsis, Catching Fire: Katniss Everdeen, having survived the Hunger Games with her supposed boyfriend and fellow District 12 tribute Peeta Mellark, discovers that the Districts are gearing up for revolt against the Capitol—a revolution for which she has become the symbol. And the Capitol's President Snow will stop at nothing to punish her for the rebellious act which saved both her and Peeta's lives, including sending both of them back into the arena.

Synopsis, Mockingjay: Katniss works with District 13 in open rebellion against the Capitol. But as Peeta is mentally hijacked and District 13's methods become increasingly brutal, Katniss has to fight while wondering who she can really trust.

Notes: Here's the non-spoilerific version of my review of these books. (For the version with spoilers, click here.)

People who describe their favorite stories as "gritty" and "realistic" will probably get more out of this series than I could. I've heard the books compared in flavor to Golding's Lord of the Flies and Orwell's 1984: dark, dystopian, and not afraid to be brutal. (I've got both of those on a reading list headed something like "Books I Should Read Someday So I Can Say I Have But I'm Really Kind of Hoping I'll Die Before I Get Around to Them." Yeah, I know that sounds bad. But there are a lot of books in the world, and it's amazing how far down the priority list I can keep the depressing ones.)

I chose to go ahead and read the Hunger Games series to be able to contribute to discussion at The Hog's Head, something I'm glad to have done but had a hard time doing. The story is neither pleasant nor meant to be. It is meaningful, but the surface is so saturated with grisly tortures and death that it's hard to look for anything deeper. There were things I loved about the books, but I still can't think about the details without emotions and mental pictures I'd rather not revisit.

Beneath the horror I feel over certain details, I can sense a lot of interesting thought undergirding the story, some depth of idea and perhaps even more hope than I've yet managed to gather from it. For anyone interested in analysis, John Granger has about thirty posts delving into the meaning of the books just since Mockingjay was released (and many more before).

Recommendation: The books were a bit much for me, but there is some worth behind the horrific imagery. Know what you're getting yourself into.
Posted by Jenna St. Hilaire at 10:00 PM