For anyone who didn't hear this already through Facebook: We have a new family member. 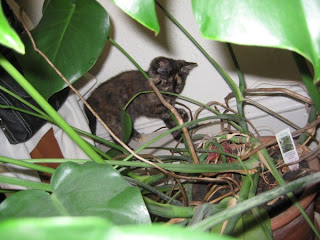 We've called her Maia, because a) it's pretty, b) it's a star name (the eldest of the Seven Sisters) and c) it was used by C.S. Lewis in Till We Have Faces. What's not to like? Besides, it's incredibly easy to call across the house when we don't know where she's hiding.

As the daughter of my parents' mouser (yes, she's one of these), she spent the first four months of her life out of doors, where the chickens decided to give her a rough time of it. She has taken to being an indoor kitty very cheerfully, with only one problem: her favorite place to be is my big Mexican Breadfruit plant, and—after an extensive Google search when she started playing with it—I've learned that those are toxic to cats. I keep having to chase her out of it. It probably won't kill her, but if she eats it, it certainly won't do her any favors. 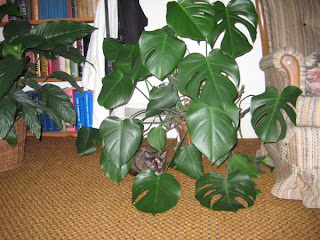 So far, it's mostly just a place to play. Big leaves, perfect for hiding behind or attacking... long runners, great for pouncing upon... branches big enough to climb around in... she can pretend she's a baby tigress in there. 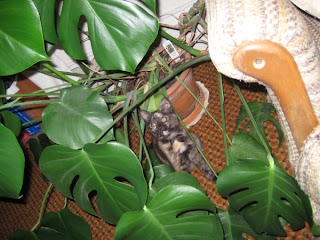 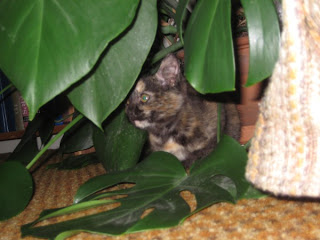 Crazy plant lady has problems, though, in the form of an even more toxic peace lily, dragon tree, and poinsettia. I may have solved one issue accidentally today by knocking over the vacuum onto my six-year-old poinsettia, breaking off over half of the plant (if I wasn't so worried about her eating it, I'd have cried) but the remaining plants have me a little paranoid. Those plants are big and old and have been with me forever, but I don't want to risk her health. Should I keep them around and just watch her when she has the run of the house, as I have been? Or give away the potentially dangerous ones and find a new way of decorating my living room? Cat owners disagree. 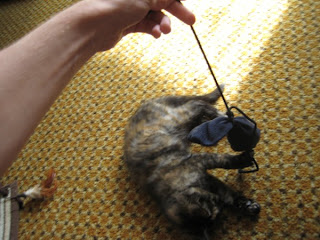 Aside from the breadfruit plant, she likes the toy I made her with an old sock, a rag and a broken shoelace. Likewise, her catnip scratcher, the old chair, the wrist strap on the camera (trying to take pictures of her is challenging), the cursor on my computer screen, and my hair. I'm still waiting for her to discover toilet paper. 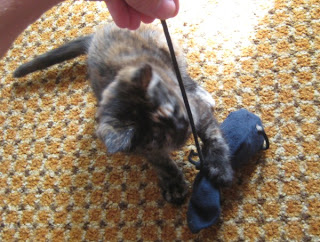 But my favorite thing is how she comes and sleeps beside me sometimes when I'm working on the computer. It usually means typing one-handed because she'll drape over one arm, but goodness, it's cute.

Lou likes her, too, which makes me feel better about not only begging him for her but getting him to talk our landlord into allowing a kitten. The landlord's original words had been "A mature cat might be all right." But he was magnanimous. And we are grateful.
Posted by Jenna St. Hilaire at 9:35 PM