A Bit of Earth and other stories

So, after six years of identifying with Gryffindor, I got Sorted on J.K. Rowling's Pottermore (still in beta) site this week.

Turns out, I'm a Hufflepuff. 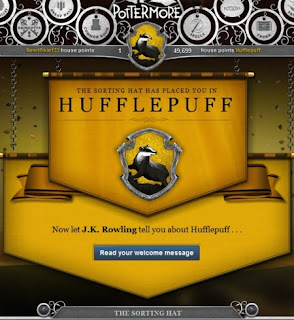 A Hufflepuff! Not overly surprising, actually—I've sometimes called myself a Gryfflepuff, because I couldn’t quite decide between the two. I like Hufflepuff's openness, its generosity, and the intense goodness and loyalty many of its residents offered Harry. And when you spend the whole Sorting process going "Not Slytherin, not Slytherin", it's nice to wind up in the house that has produced the fewest Dark wizards.

Also, the House description felt like a perfect fit. I never realized that a Hufflepuff could be strong-willed, but the House is represented by a badger. More on that, eventually, at The Hog's Head.

Having a garden brings to mind all kinds of literary references. Currently, I'm 'reaping where I did not sow,' in broccoli and tomatoes and kale. Also, I'm remembering the work Mary and Dickon and Colin went to in restoring their Secret Garden. The 'bit of earth' I've been given has definitely spent some time growing over with grass and weeds. It's both hard work and delight to restore.

I haven't found a good literary comparison for keeping neighborhood cats from digging in soft seed beds, or for building slipshod tomato shelters from bamboo sticks and twine and old sheets. Or for slugs and tomato worms and spiders. I've got a few good naughty words, though.

Writers' link of the week: Bob Mayer's "If I were an unpublished author, would I self-publish?" He makes a great point about the importance of having multiple works.

Music of the week: my new House theme song. I got such a kick out of all the little (properly spelled) icons in this video that I just went over to fanpop.com and downloaded a bunch of them. "No one ever suspects the Hufflepuff." LOL.

Funny of the week: OK, one more Harry Potter link, and then I'll stop. For today. But seriously, I love the snarky answers to math test questions, and this one made my day. And if you need more funny answers to test questions, well... I thought I'd seen nearly everything the internet had to offer, but was surprised to tears of mirth by a couple of these.

Time to clean house! According to the Sorting Hat, Hufflepuffs are "unafraid of toil." And hey, if we're talking about writing, I'm right there. With housework, however... I think I'm still a bit of a Gryffindor about that.

Happy weekend, everybody!
Posted by Jenna St. Hilaire at 1:41 PM

Email ThisBlogThis!Share to TwitterShare to FacebookShare to Pinterest
Labels: ...and other stories, Harry Potter, Hufflepuff