Good morning, magical friends! It's sunny, I'm wearing my Hufflepuff outfit—minus the fishnets—and it's time to talk about monsters and fame and unicorns and planets and Harry! Before we do, though, here's last week's recap and a mini-essay... I have a feeling those will be common henceforth:

Masha posted first with a beautiful drawing by her husband—seriously, you should follow her for Seth's artwork as well as her own commentary—and some tender thoughts on Ron's inner hungers and strengths as seen through his Mirror of Erised experience. Meanwhile, Christie posted pictures of her attempt at our first butterbeer recipe, which looks tasty, even if, as she said, chocolate wine made it not beery enough. She also expounded upon on some of the particulars of Dumbledore's conversation with Harry, to lovely effect.

Mini-Essay #1: A Brief and Inadequate Reply to the Two Main Varieties of Serious Potter Critic


Anti-Potter article number one is one of the most famous among Potter fans: Harold Bloom's 2000 piece titled "Can 35 Million Book Buyers Be Wrong? Yes." Professor Bloom—of Yale—is a very well-known literary critic, author of The Western Canon as well as many other books, and certainly not someone whose literary understanding can be thrown away lightly. He's had a very interesting career, judging by a quick scroll through Wikipedia (yeah, I know), and I confess to respecting him more after looking at his achievements than I did after reading his article.

This response is inadequate on several levels; I don't have time to go point by point, and I don't begin to have comparable education, let alone experience. Others have done better. My difficulty with Bloom's piece is simple: he and I have totally different perspectives on something, and I'm not sure whether the point of profound disagreement is centered in the evaluation of literature itself or in the definition of what it means for reading to "enrich mind or spirit or personality." But we certainly have inconsonant opinions on the latter.*

Anti-Potter article number two is too recent to have gained the kind of widespread internet contradiction that it would have in the heyday of Potter fandom. Obviously, Michael O'Brien has gained widespread contradiction enough to put him on the defensive, however, and the whole tone of the piece is affected by this. To be fair, the piece is an interview with him on the very subject of his critics: Steve Jalsevac's "Michael O'Brien responds to his critics re: Harry Potter" at LifeSiteNews.

O'Brien, author of the controversial A Landscape with Dragons: The Battle for Your Child's Mind as well as the Father Elijah books and many others, has achieved something of a cult following for his detailed, religious-based criticism of various fantasy works. I hate to even give it the vague honorific "religious-based", since as a Catholic, he should know that there's no one-holy-Catholic-and-apostolic interpretation of any fictional work. The relationship of fiction to dogma is even fuzzier than the relationship of fiction to reality.

The inadequacy of my response is in how little space and time I have to devote to it at present. I'd love to go point by point, as displayed in my overexuberant reaction in Masha's combox. But I'll keep myself to the base problems with O'Brien's critical technique, which are twofold.

First, he treats symbolism as if each symbol is a neat container for a single positive or negative idea. This is simply not true. Snakes, for instance, are not universally irredeemable symbols of evil. They're not even treated that way in the Bible. With no appeal to the context of a given symbol's portrayal, O'Brien is doomed to miss the point of the story, and he consistently does.

Second, his understanding of the moral universe of Harry Potter is so baffling as to make me think of the ever-popular Internet aphorism, casually attributed on Goodreads to both Edmund Wilson and Diana Tixier Herald—goodness only knows with whom it actually originated—which states that "No two persons ever read the same book." If he'd read the same story I had, he could never have said this:


"In Potter world, the saving of the world comes through acquiring secret knowledge and perfecting supernatural powers, while never really developing significant character or virtues such as those we can so clearly see in Tolkien’s and Lewis’s heroes."

There are reasonable criticisms to be made of the Harry Potter stories, and he makes some, but that's certainly not one of them. He's wrong on all three points there, demonstrably wrong:
That last point, in particular, is farcical. If anything, Rowling is clearer in her symbolism and her direct emphasis on virtue than Tolkien was.

It's hard to focus on single discussion points in these chapters; there are so many events to think over. Neville's character gets some development, and it would be hard not to end up loving him. Hermione and Harry manage to leave the Invisibility Cloak behind while sneaking around the castle at night, which has never made any sense to me, since Hermione is quick-thinking and cautious, and since the cloak is the only thing Harry has that was his father's. Harry's scar acts up in one of the most horrific scenes the books possess, and he's rescued by a centaur named after Florence, Italy (in Italian, the name is Firenze). Hagrid proves to be a valuable source of information, while cooing to a baby dragon and calling himself "Mommy".

Hagrid is so much fun. I just love him.

Some Other Potential Discussion Points: 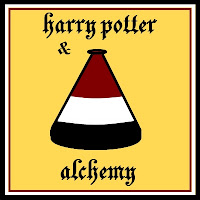 1. Nicolas Flamel. This historical character—yes, he was real—has had long-standing legendary (and probably not real) status as an alchemist. A successful one; that is, he's said to have made the philosopher's stone. Rowling put the legend into play for her first mystery, and the sorcerer's stone, from which comes the Elixir of Life, is guarded underground at Hogwarts behind a series of enchantments and, appropriately, Cerberus.

This is only going to get more fun in the next chapters.

2. "Our kind have to keep putting spells on Muggles" Ron's offhand remark about the Ministry of Magic's handling of Muggle sightings of dragons is one of the first revelations of unethical Wizarding practices surrounding the Statute of Secrecy (the law preventing wizards from revealing themselves and their world to non-magical humans.)

3. Popular opinion. Rowling knows how fame treats a person now, knows it firsthand, but she apparently had a perfectly good understanding of it from the outset. Hogwarts students as a group vacillate between lionizing and demonizing Harry, and as far as I know, every famous person suffers this.

Ron was probably my favorite character in book one, and his loyalty to Harry in this section was part of that.

4. Legality and mercy. Harry and Hermione get into trouble saving Hagrid from the law and himself. Hagrid is good-hearted, but not at all likely to pay much attention to seemingly arbitrary regulations about monster-keeping. And his confidence in his monster-managing skills—this is just the beginning of it, we haven't met Aragog or Grawp or the Blast-Ended Skrewts yet—is hyperconfidence; he's hiding a baby dragon in a wooden house.

Even law-abiding Hermione doesn't hesitate to help Harry get the dragon safely off to someone who has the wherewithal to keep it, though it means breaking a lot of school rules—and when she's caught, she doesn't betray Hagrid even to lessen her punishment. Nor does Harry.

This sort of ethical dilemma is generally resolved by Rowling with an eye to compassion rather than judgment, to mercy rather than straight-up justice. Ethicists and moralists will be arguing till the end of time over which virtue is more important in which case, but I think it's within the bounds of Catholic freedom to believe that both mercy and justice—as well as both compassion and judgment—are important, and that humility and wisdom and respect are prerequisites for good decision-making wherever the two seem to conflict.

In this case, going to Dumbledore would've been the best way to protect Hagrid, but Harry's just an eleven-year-old newcomer who doesn't yet know his headmaster. He handles it like a well-meaning eleven-year-old kid would, and suffers the consequences.

5. "Mars is bright tonight" The centaurs are reading the signs of war in the sky—and being infuriating in the process, which is mostly what the centaurs in Harry Potter do.

6. "Always the innocent are the first victims" Ronan's sighed philosophy strikes me as something to contemplate, but I'd need to put more time into it than I've got this afternoon. Anyone who wants to unpack his statement, feel free.

7. Unicorn blood. Firenze explains: "...it is a monstrous thing, to slay a unicorn... Only one who has nothing to lose, and everything to gain, would commit such a crime. The blood of a unicorn will keep you alive, even if you are an inch from death, but at a terrible price. You have slain something pure and defenseless to save yourself, and you will have but a half-life, a cursed life, from the moment the blood touches your lips."

This paragraph sets up the—if you'll pardon the wordplay—crux of the entire Potter saga. The conflict on which the whole story turns is this conflict between defenseless innocence and selfishness taken all the way to monstrosity.

Voldemort sets himself up as a god again and again throughout the story, sometimes coming off as a temperamental Grecian-style deity, but sometimes as something more sinister. Whether Rowling intended it or not, Voldemort's portrayal is often Luciferish, often a direct inversion of the Christ-image. This is one of the latter moments. Eucharistic imagery is inverted here as, instead of the divine self-sacrifice, we have a demoniac sacrifice of the innocent Other. And Firenze sets the passionate tone of righteous response:


"Do you not see that unicorn?" Firenze bellowed at Bane. "Do you not understand why it was killed? Or have the planets not let you in on that secret? I set myself against what is lurking in this forest, Bane, yes, with humans alongside me if I must."

As for what else stands between the defenseless innocent and the selfish monster, we'll get into that in chapter seventeen. But it's worth noting that both Harry and Voldemort are set up symbolically as representatives of our inner self. This becomes very clear in, if I remember correctly, books five and six—but if I say more about that, there will be spoilers....


* I was SO tempted to find a random trash can picture on the internet and caption it "The Dustbin of the Ages". Juvenile, I know, but that phrase just kills me.

** All right, Latinists. This is me using Google Translate; feel free to tell me I'm using the wrong word for the imperative "Discuss!", and that I'm liable to wind up smashed under a stack of hardbound doctoral theses....
Posted by Jenna St. Hilaire at 5:35 PM