A Variety of Neuroses and other stories

Lou and I sang at a funeral today. I didn't know our departed family friend, John Byrnes, very well, but I do remember his joyful spirit and his determined, powerful faith.

Rest in peace, John. Your faith leading up to death has been a great witness to me.

I've had a scratchy throat and episodes of hoarseness throughout the Christmas season, and more public singing in the last three weeks than I've had in the past two or three years together. Not a great combination.

Many thanks to those of you who prayed for me today. I was awfully hoarse last night, and for the funeral I had to sing Andrew Lloyd Webber's Pie Jesu and the Bach/Gounod Ave Maria. Both of those songs require immense amounts of control, and rasping is hardly preferable. My voice cracked a bit at the beginning of the Dies irae, which Lou and I sang as a prelude, but it held up through the rest of the service. I am grateful.

Lou and I came home this afternoon and took down the Christmas tree. The holidays have reached their close, and already my mind has set itself into spring season. Time for the leaves to start coming out! Before long I'll be able to wear sandals again! Oh, wait... it's January.

Truth be told, I'd rather have a miserably cold and rainy winter and a nice spring and summer than have the cherry trees start blooming in January, like last year, followed by chilly rain through mid-July. Ack. Another year like that, and I'll threaten to move to Phoenix again. (I never really mean it—we have too much family here to gallivant off to the desert—but I do threaten.)

New author Veronica Roth is giving away ARCs on her blog, and anyone who enters gets double credit for getting her a picture of indecision. Fortunately for me, I've spent all week trying to make a decision.

I made use of a not-overly-common structure in my novel, and it has evoked strong and opposing opinions among my Greek-letter readers. It means a lot to me that people care that much about the story, but that hasn't made the decision—of whether to keep or lose that structure—easier. My instincts are on one side, but most of the detailed reasoning is on the other. This, therefore has been me this week: 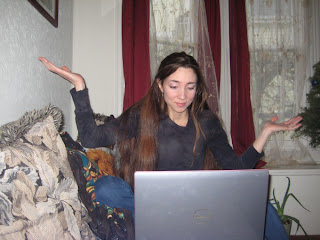 and this probably won't get me extra credit, but I had to do the pulling-my-hair-out shot: 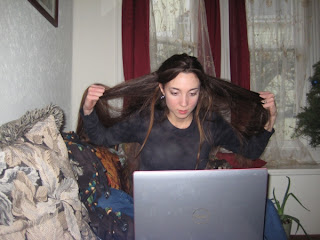 Here's to you, Veronica Roth. I hope I win!

Music of the week: Last week I posted a video from composer Eric Pazdziora. It's long past time I featured a song by Eric's wife, Carrie, who has one of the more lovely voices I've ever heard. A crackly YouTube video can't fully do it justice; you just might want to hop over to her site and listen to songs off her album.

And... that's all I've got. If you want something funny, here's a link Mr. Pond posted in the comments recently. It's got a swear word or two in it, but it sure made me laugh.

Happy weekend, everybody!
Posted by Jenna St. Hilaire at 9:37 PM