After several months of having an active Twitter account, in which I've mostly fluctuated between posting a couple of times a day to several days of silence, I have come to the same state of suspended decision I've struggled with all along: Twitter seems like a great idea, but I have no idea how to really take part in it.

Or, in other words: 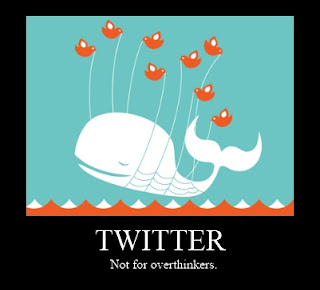 As far as reading other people's tweets, well—that's my television. It takes me less than one sitcom of time per day, and it's pretty nearly as entertaining; people can be creative and funny and interesting, and I enjoy following.

But I never quite know how to jump in there myself. Oh, I've read article after article on How to Use Twitter—after all, it's considered a good skill to have in the publishing industry—but in some ways, those just freeze me up. Every time I pull up Tweetdeck and start to type, I hear all the warnings about not being overly self-markety (so I rarely tweet a blog-post), not tweeting a constant self-broadcast (so if I haven't retweeted someone else's post in the last day or two, I don't dare tweet at all), and making sure you're contributing to the conversation (what conversation? Everybody's talking at once! This is so not polite English talk over tea....)

All I know is: I'm not quite ready to give it up yet.

Email ThisBlogThis!Share to TwitterShare to FacebookShare to Pinterest
Labels: the introvert life, writing