Roaming the Milky Way and other stories

Some Fridays I can find a lot to write about, but then, some Fridays I'm alert and focused. Today, it's sunny and cold, and I'm sleepy. I'm also oddly prone to dropping things, and I keep forgetting what I'm supposed to be doing in favor of, say, contemplating whether to give one of my young novel characters a short man ponytail or a faux-hawk instead of generic "cropped hair". Really important stuff like that.

[The tenth of my brain which is actually awake is muttering, "A faux-hawk, really? Leave the poor kid some dignity." But the somnolent nine-tenths have me almost convinced it's the logical choice.]

Fortunately, posting cat pictures doesn't take much brain power. Less fortunately, I don't have a nice long cat-photo series, since Maia has decided to spend the chilly day burrowed in the bedclothes. But here's the amazing camouflaged creature in her natural habitat—my fleece throw: 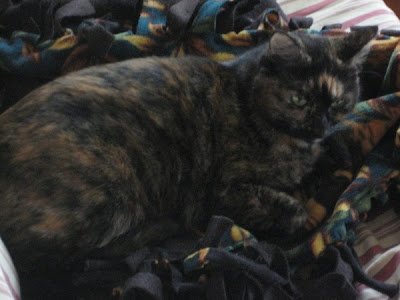 Three-year-old niece: “Auntie Jen, you have bumps on your face.”
Me: “It’s unfortunate, but true.”
Niece: “Why?” (yes, she’s in that stage)
Me: “Because Auntie Jen’s face, like her soul, has never realized that she’s not a teenager anymore.”

Writers' link of the week: All right, as much as I hate .gifs, the tumblr Title To Come made me laugh and laugh during the inevitable procrastination this morning. The two that arguably made me laugh the hardest, in the first twelve pages at least: "When people tell me writing isn't a real job" and "When someone points out a massive plot hole in my manuscript." Advisory: language. Sometimes very funny language... that last .gif comes from The King's Speech. If you've seen that, you may be able to guess which scene was used. :P

Music of the week: A lovely Celtic rendition of the Ubi Caritas.

Random amusement of the week: Funny, I've been saying "hold down the fort" my whole life, without ever thinking about how silly it sounded. No more! Vlogger David Mitchell has corrected me. But at least I knew not to say "I could care less", right?

And now I should go clean house, which task, in my current half-dreaming state of mind, is probably going to resemble this scene of Anne Shirley's:


"I don't like picking fowls," she told Marilla, "but isn't it fortunate we don't have to put our souls into what our hands may be doing? I've been picking chickens with my hands, but in imagination I've been roaming the Milky Way."

"I thought you'd scattered more feathers over the floor than usual," remarked Marilla.