Priority Dilemmas and other stories 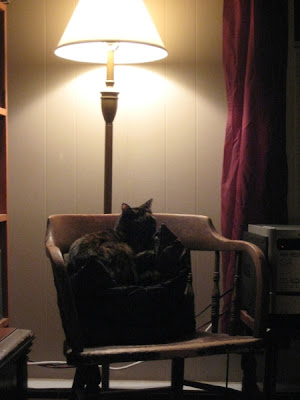 Maia: "YES! You're finally sitting down. After a flipping HOUR of me following you around and meowing. Ahh, a nice warm human lap is the best place on a cold day. Purrrrrrrrrrrrrrrrrrrrrr."

Rarely as I make it to movies, this week set me fangirling over three.

First, I made plans to see The Hobbit with a group of friends. Yes, I'm terribly skeptical about it on numerous grounds, and I'll probably re-read the book beforehand in order to prepare myself to fume at Peter Jackson like a proper nerd. Or to sympathize with my fuming-proper-nerd friends, at least. But I'm sure I'll find some things to cheer for. Cinematography! Martin Freeman! Gandalf!

Of course, Les Miserables is coming out within days of The Hobbit, so I had to look that up again to check on things—and it purports to be one of the rare Hollywood offerings that could be worth the price of seeing it in the theater rather than waiting for it to turn up at Crazy Mike's or on Netflix. Besides, it was directed by Tom Hooper, who directed The King's Speech. Presumably everybody knew that but me... anyway, that movie looks unusually un-missable.

Lastly, I discovered yesterday that a trailer was just released for the adaptation of Stephenie Meyer's The Host, which is coming in March and which I must see. If it's as good as the first three Twilight movies—I haven't brought myself to watch Breaking Dawn—I'll be satisfied.

Oh, and while we're on Twilight, consider my heart officially warmed. H/T Arabella.


Reader's link of the week: Anthony Daniels' remarkably self-aware essay on one book-lover's attempt to survive the apocalypse as bibliophilia—or book-publishing, at least—goes digital.


"Whether the book survives or not, I am firmly of the opinion that it ought to survive, and nothing will convince me otherwise. The heart has its beliefs that evidence knows not of."

Writer's link of the week: Being unpublished is better than being badly published. Which is an oddly encouraging, if irrelevant, thing to remember when I'm stuck in all kinds of revision.

Music of the week: I've often said that I think Palestrina's "O Bone Jesu" is possibly the most beautiful piece of art in existence. But Mozart's "Ave Verum Corpus" comes awfully close. Lou and I are singing it in an ensemble for a concert this weekend.

Random amusement of the week: The Postmodern Essay Generator. It's a bit scary how close this comes to making sense. Or as much sense as a postmodern essay can make, anyway.

Possibly owing to Murphy's Law, what with the concert coming right up, I've got a touch of a cold, which has sapped all motivation. Clean house? Whatever. Practice concert music? Meh. Get any real writing done? Why, when there's a whole internet full of mind-numbing available?

But I can procrastinate no longer. Even though Maia's being cuddly.