Sunny with a High of 75 and other stories

After the long, gray, wet, chilly month of—as Arabella called it—Juneuary, the sun came out on Independence Day and has stayed out.

That's right: while most of North America has seared under the kind of heat that raises casual comparisons to the core temperature of hell, Washington State slept right through whatever alarm clock was supposed to wake it up to summer. (Again.) Highs of 53 degrees, the sort of cloud cover that makes the whole world feel like a shabby, florescent-lit basement office, and raaaaaaaaaaaaiiiin.

Lou took the first half of the week off work, and as I'd incautiously volunteered to host my book club's barbecue this month, we bought our first propane grill. An acquaintance spotted us in the hardware store with the big box and laughed. "I remember the first time my husband and I got one of those," she told me. "I think we almost got a divorce while trying to assemble it."

On Wednesday, we combined efforts—me in preparation, him at the grill with tongs and spatula—and I have to say that the bratwursts and vegetables turned out awesome.

It's hard to get photos of our gratuitous cat when she is completely anti-social in warm weather. 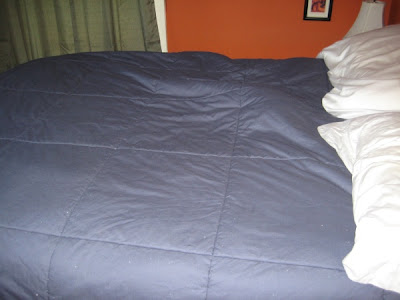 The clematis, however, doesn't seem inclined to waste the summer in hiding. I love this vine already. 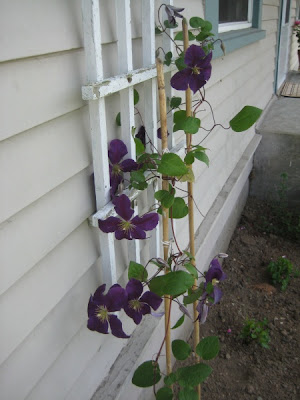 Music of the week: For the first time ever, on the Fourth I saw flying lanterns. Just a few, but it was mesmerizing. And it got me humming this song (this cover seems to outrage copyright at least a little less violently than the ripped sections of the movie available on YouTube do.)

Random amusement of the week: internet memes, as described by Chaucer. My favorite is "Of the Doublede Rainbowe", I think. H/T Egotist's Club.

It's funny, but even though I know that standard American practice is to put all punctuation inside quotation marks, I cannot seem to help going British in this regard. The UK system is less straightforward, but ah, it just makes so much more sense.

But never fear, I found other reasons to celebrate Independence Day. :) Hope all you Americans had a great one...