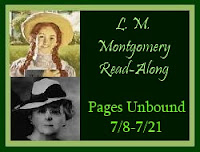 This review is posted as part of Pages Unbound's L.M. Montgomery Read-Along. Love Montgomery? Visit their site for reviews and a conglomeration of Montgomery-related posts!

Pat came dancing down the hill that night on feet that hardly seemed to touch the ground. She halted under the Watching Pine to gloat over Silver Bush, all her love for it glowing like a rose in her face. It had never looked so beautiful and beloved. How nice to see the smoke curling up from its chimney! How jolly and comfortable the fat, bursting old barns looked, where hundreds of kittens yet unborn would frisk! The wind was singing everywhere in the trees. Over her was a soft, deep, loving sky. Every field she looked on was a friend. The asters along the path were letters of the poem in her heart. She seemed to move and breathe in a trance of happiness. She was a reed in a moonlit pool... she was a wind in a wild garden... she was... she was Pat Gardiner of Silver Bush!

"Oh, dear God, this is such a lovely world," she whispered.

"A nice hour to be coming in for your supper," said Judy.

"I was so happy I forgot about supper. Oh, Judy, I'll always love this day. I'm so happy I'm a little frightened... as if it couldn't be right to feel so happy."

"Oh, oh, drink all the happiness ye can, me darlint, whin the cup is held to yer lips," said Judy wisely.

Joint Synopsis: Pat Gardiner loves her home and hates even the smallest change—at least, until she gets used to it. Resolved from her childhood to give over all thought of marriage and live at Silver Bush forever, she possesses both the passion and the strength of will to make that happen. What she cannot do is avoid change, and only the comfort and affection of Judy Plum and Hilary "Jingle" Gordon can make her able to bear the great changes of life.

Notes: It's not going to be easy to review these books; I'd rather rave over them. If I can't quite contain that tendency, forgive me.

The Pat books were written within about ten years of Montgomery's death, in a time when her writing had become—whether due to fashion or to her own life difficulties—rather episodic and a little more prone to mistakes, as well as somewhat given to a dreamlike overuse of ellipses. Considering the hardships she suffered through her own depression and her husband's, the wonder is that there aren't more oddities in her novels of that last decade (which novels include Anne of Windy Poplars and Anne of Ingleside).

Pat's story, though difficult to get into at first due to lack of overarching plot, gradually gains the reader's full attention. Montgomery could create impressively lifelike and memorable characters with very simple strokes of the pen, and while she limited that to a chosen handful in this story—antagonist May Binnie is as flat as the paper she's written on—among that chosen handful are some of the best Maud ever imagined.

The crown jewel of these is Judy Plum, live-in housekeeper, family caretaker, and superb storyteller. Entrenched in the Gardiner family, practically a close aunt or second mother to Pat and the other children, she and her anecdotes carry the story, sometimes doing more for it than any other force. An artist in the kitchen, in her storytelling, and in her rug-hooking, Judy rivals any Montgomery character for pure fascination.

Pat Gardiner doesn't lose the limelight, however. Entirely lacking in ambition, she also lacks Anne Shirley's propensity for "scrapes" and, more importantly, Emily Starr's cool pride. She shares their love for beauty, however, and equals or supersedes both Anne's love for gardens and trees and Emily's devotion to home. Innocent and loving, she's a delight to read about despite her one key blindness.

That blindness relates to Hilary Gordon, Pat's dearest friend, also known as Jingle. Gilbert is perhaps the most popular of Montgomery's heroes, and Barney may be the most charismatic, but Jingle is superlatively wonderful. Good to the core of him, artistic and sweet, suffering and affectionate, he's got everything going for him. He even has a great little dog, and I'd be remiss if I didn't mention McGinty as a character in his own right. Anyone who has ever had the honor of receiving a good dog's loyal adoration will recognize and love McGinty.

The scattered tales of Pat's childhood and teen years end with three major changes and a hope, and that was more than enough to make this reader take up the sequel.

Like its predecessor, Mistress Pat takes a little getting into, mostly because Hilary Gordon is away. The reader must unfortunately spend quite a bit of time missing his presence in the story, and the very structure of the book makes it obvious that Pat will continue her blindness for an absurdly long time.

Fortunately, Judy Plum has not gone anywhere, and her lively presence at Silver Bush receives the additional spark provided by a foil: one Josiah Tillytuck, whose tall tales and cornball personality fit right into Judy's kitchen and bring out the more fiery sides of her personality. Between the two of them and Cuddles, I laughed aloud several times reading this book—which was bad form, considering that it was after midnight and my husband was asleep beside me.

Cuddles, Pat's sister Rae, gives sweet and domestic Pat someone to play mother to a bit. The relationship between the sisters is one of the sweetest parts of this story, and as a big sister myself, I could not but love and sympathize with nearly everything about the way they interacted.

In spite of her one stupidity, Pat spends a fair portion of this book reasonably happy. Her closeness to Judy has matured into something truly beautiful, she has Rae to watch over and protect, her joys and sorrows are mostly deeper than in the previous book, and she throws herself into care of the home she loves. Silver Bush, with its old graveyard and generations of history, its trees and gardens and innumerable little beauties, as well as the nearby little spot that Pat and Hilary named "Happiness"—Silver Bush is a true home among houses, worthy of the devotion bestowed upon it.

For Pat to understand and repent of her great mistake, however, the story requires some change, some loss—and the changes begin when a certain cat (not Bold-and-bad, but seriously, Bold-and-bad is the best cat name I have ever heard) rises and walks out the door, never to return. One by one, the brightest parts of Pat's life follow suit.

The story dives deeper into misery than even the depressing Emily's Quest, but with this difference: Pat is innocently mistaken where Emily is proud and prone to making very bad assumptions. Pat retains the reader's sympathy better than Emily does. Because of that, her consolations are stronger, the sorrows contain less of bitterness and more of beauty, and the climactic events happen naturally rather than involving baffling character choices and/or supernatural intervention.

I'm not sure I've ever felt closer to a character than I did at the moment Pat stands alone in her blue coat and crinkled red crepe dress, alone with the destruction of the life she'd built up for herself, exhausted and desolate. Montgomery's own unbearable weariness appears there as it never appears in Anne's story. The suffering is overpowering, but it's also very real and comprehensible and exquisitely portrayed.

And then—two words, and Montgomery's final magic begins. The ending is just what it should be: poignant and sweet and filled with that rare, acute, vital hope that keeps life going, for it possesses the strength to rise from ashes.

Recommendation: Read these books for a quiet tale of poignant sorrows and domestic joys, with a few unusually wonderful characters.
Posted by Jenna St. Hilaire at 11:09 PM