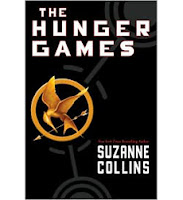 Synopsis: Like everyone in the twelve districts of Panem, Katniss Everdeen dreads the annual event where one boy and one girl from every district will be chosen to participate in The Hunger Games, a televised competition in which the players fight each other to the death. But when her sister Prim—the only person she really loves—is called forward, Katniss volunteers to go in her stead. Once in the arena, Katniss faces sadistic young killers, the rigging of the Gamemakers, a girl who reminds her of her sister, the boy whose gift of bread once gave her the will to save her family from starvation—and the fact that her greatest enemy may be the governing powers who enforce the Games in the first place.

Notes: Not every work of fiction is meant as entertainment. (Who'd read Steinbeck if it were otherwise?) Suzanne Collins got the idea for this book while flipping channels, coming across both reality television and war coverage. The result is not a happy entertaining little story; it had me crying before I'd made it through two chapters.

The writing is compelling. Katniss narrates in present tense, which I usually just think is a bad idea, but it read smoothly and made the situation feel very imminent. Also, though calculating and angry, she proves sympathetic; her character develops throughout the story and she is clearly unsettled and unfinished at the end of the book. Hence, two sequels, the final one due at the end of this month.


As for the concept: I don't do well with violence. I've put down a series for that before and I'm perfectly willing to do it again. But The Hunger Games has a couple of redeeming factors: first, that the violence doesn't seem gratuitous, at least not in relation to the plot. Horrific, yes, but this story tells of a government so corrupt that it takes people's children, turns them into gladiators, and makes their combat required viewing. Death is part of the deal, and the interest of the story is not in the violence itself but in the characters' struggle against their own dehumanization.

Second, the tale is a sharp critique on our voyeurism as a people: not only do we enjoy watching scandal and betrayal and vicious behavior on reality television and in celebrity magazines, but even the news networks market their stories to that lowest common denominator. It could be said that there's an irony in making a novel out of this concept at all; Collins, however, seems to have made a distinct effort to avoid that. The best moments in the book involve the opening of Katniss' eyes to her own need to work actively against evil, no moment more so than when she sings a dying fellow competitor to sleep and heaps the body with flowers. For more, I highly recommend Travis Prinzi's reviews Panem's Politics and Power and Imagination.

The ending really upset me, though. After eleven hours of persevering through the horror (that's the last time I read anything like this by audiobook; I could have shortened the excruciation by more than half if I'd gotten a hard copy), all I could feel was that my favorite character, whom I really loved, was in a fair way to wind up dead or unhappy or both. I ranted to Lou for half an hour, much to his surprise, after which I went to bed and thought about the book all night. Then I got up and read Travis' posts and thought some more, and finally decided that there might be hope and worth enough in the story to justify reading the rest of the series.

We'll see. If I do read the last two books, there'll be posts here and/or at The Hog's Head.
Posted by Jenna St. Hilaire at 5:08 PM