The Great Annual St. Hilaire Family Huckleberry Picking Experience happened this week, and I am currently so tired that my most energetic act of the day has been jumping up at the discovery of a spider crawling up the couch next to me. Since I have a mountain of laundry to do, a book club party and a road trip to plan and shop for, and a few pounds of huckleberries to wash and freeze, I'm going to need more motivation than that.

I loved the huckleberry picking party, though. We had perfect weather, comparatively few bees/wasps/hornets, and not a single mosquito that I noticed. This was my first year going at the same time as the majority of the family, too, which made it especially fun. Here are some pictures.

The campground, as people began arriving: 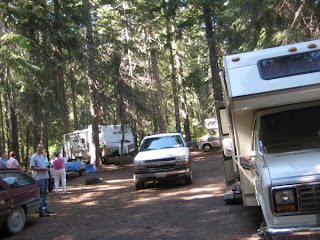 Our little home away from home: 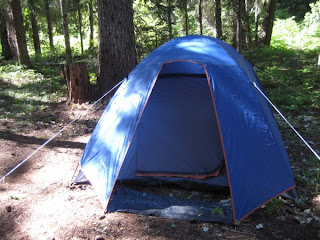 Looking up (my favorite thing to do when camping; I tried to take pictures of the stars, too, but apparently our camera doesn't do night shots): 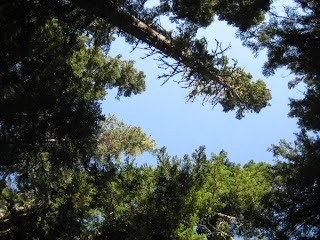 Me plotting my novel for NaNoWriMo; or, as Uncle Claude called it, doing my homework: 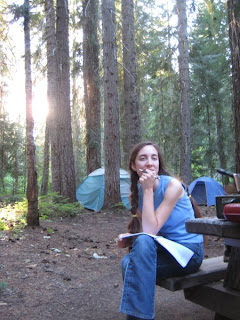 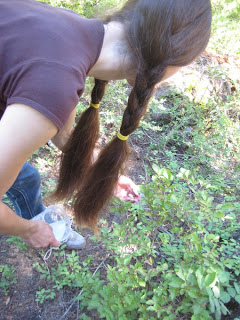 ...and feeding them to my godson: 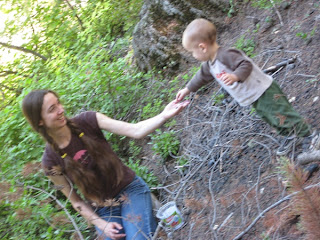 In the morning of the berry-picking day, I busied myself in a good patch of bushes, picking away and daydreaming about my novel characters. It didn't take me long to fill my little berry bucket, and then I went looking for Lou.

Unfortunately, I'm the sort of person who doesn't dare get out of sight of the trail, because I can get lost anywhere. And I couldn't find Lou. I went as far as I dared in every direction, asked everyone I saw if they'd seen him. Nobody had. I told myself he hadn't gotten lost--unlike me, he can actually be expected to go someplace and find his way back--but the woods are big, and just because I've never seen a bear or cougar up there doesn't mean there aren't any.

After what felt like an hour of searching, someone thought they saw him. It wasn't him, it was his brother, but I ran after Andy and asked if he'd seen Lou, and he pointed further up the ravines. So I had a mini-Gryffindor moment, decided I'd be all right if I followed the ravine, and bolted off into the woods.

Out of sight of everyone, I began to feel eerily alone, so I stopped and looked around. I couldn't see or hear anyone, so I shouted for Lou. Everything was silent for a moment. Then--"Yeah?" He stood up and waved, from across the ravine and further down. And I started running again, scrambled across the first rocky pass I could find, threw my arms around him, and burst into tears. And we were totally fine; no wild animals attacked, and though I was completely lost at that point, he knew exactly where we were.

I stuck with him after that. Which means, since he liked that spot way off by ourselves, that I didn't get any pictures of the group picking. Oh well. Here he is: 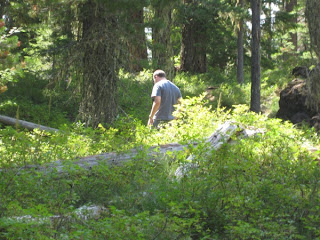 and picking down in the ravine again: 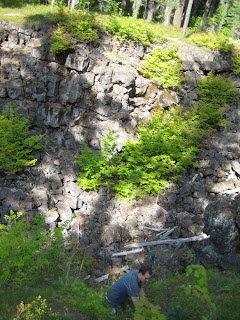 Once I found him, I decided it was a beautiful place to stop: 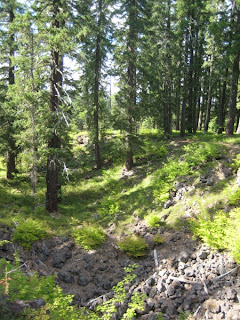 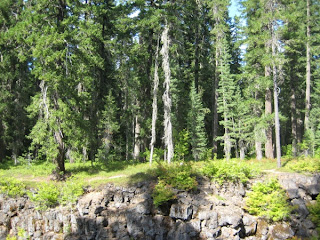 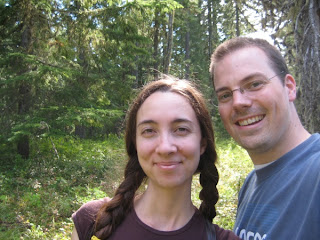 After finishing the day's picking, a group of us went down into a little cave, where the temperature dropped from about ninety to about sixty: 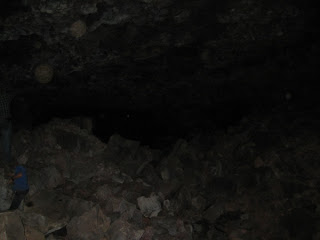 ...besides being cool, it was mostly just dark: 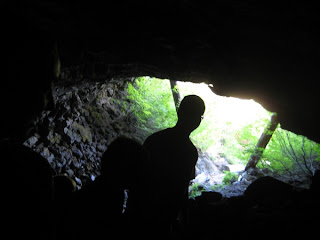 Back at camp, we got a sunset so lovely that I had to take a photo: 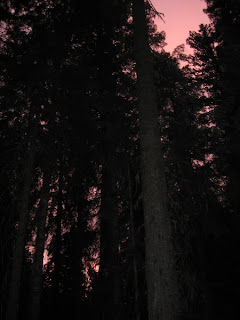 ...and at that point, I proved that I'm not much of a photographer by basically forgetting about the camera. Other adventures included packing five adults, two coolers, and all necessary camping gear into a station wagon for twelve hours, making s'mores out of enormous marshmallows, praying the rosary around the campfire, making a birthday video for Uncle Joey, and guessing at the proper technique for cooking hobo dinners on a campfire. (Maybe that should be my next Tuesday recipe. Hmm.)

At this moment I'm grateful to be home and showered, not to mention within reach of Internet access, but I'm so glad to have gone. Hey, all you cousins who didn't come: I missed you.
Posted by Jenna St. Hilaire at 3:21 PM