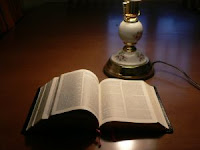 All right, I stayed up until after 3 AM writing last night. Hopefully this post makes sense.
Having read well beyond midnight many times out of absolute need to make sure the characters survive, I find it interesting to have a similar experience while writing. When I shut my computer down around eleven, I had left my protagonist in a terribly dark moment. And even though I knew she'd survive--it wouldn't be much of a book if she died in Part One--I just couldn't leave her there. I got out of bed at 11:30 and wrote her into a place of comparative ease.

Made it from page 62 to page 92 just over the weekend, thank you very much. That made me happy.

The whole weekend felt productive. On Saturday I got hit with inspiration and did a huge portion of my editing work for a project some friends and I have going. Yesterday Lou and I went to Henderson's and I bought an encyclopedia of astronomy and Inkspell (sequel to Inkheart), which I can't read yet--there are at least two other books I have to read first. And while I've been trying very hard to take a break from writing on Sundays, I wanted to get to my story so badly that I gave in and wrote--and wrote and wrote.

It was incredibly fun. But productive weekend meant less time paying attention to my longsuffering husband, so I'm going to go make him a nice dinner now.
Posted by Jenna St.Hilaire at 4:51 PM