Whirring and Beeping and other stories

Why yes, it is the middle of the night.

Once upon a time, I had a boss who liked very much to talk about goal-setting. His intense enthusiasm burned the concept of the SMART goal into my head—you know: Specific, Measurable, Attainable, Relevant, and Time-bound. In honor of said boss, I'm pretty good at four of those five. But the Attainable part? I blow it a lot. Possibly because I never say no to anything.

So, I haven't worked on either novel in two weeks, and neither will be done by the first of the year. I'm still only part way through Evoking Sound, and I've just spent all day and half the night (minus a Christmas party) finishing up the editing project. Which is why I'm up. It's finished and sent, and I still mean to get in some piano practice before bed, but I thought—what the heck, I'll blog, too. Between cleaning house, making tamales with my friend Lisa, and another Christmas party, tomorrow's not going to leave me much time for talking about my feelings and coming up with captions for cat pictures.


The Today meme is hosted by Masha! Join in over at Piękno, or leave your own sensory notes in the combox...

Tonight (and this week in general) I am...

Feeling... tired. Standard practice for all-nighters is supposed to involve things like coffee and Red Bull, right? Well. I had wine at the Christmas party. Three glasses of it. They were little glasses, but still.

Seeing... Maia contentedly giving herself a bath over in her favorite chair. It's too dark to get a good picture of that, even with the nice new camera. The camera might handle it, but I'm much too sleepy to figure out how to edit RAW tonight.

Smelling... not much, but I did put a recipe into the breadmaker, so we should wake up to the scent of hot bread. It's really worth all the beeping and whirring at five A.M.

Listening to... not much. I can't listen to music while I'm editing; the rhythms throw off the natural flow of grammar and punctuation, and any English lyrics become unmixed distraction. But I'll probably play Edward MacDowell's "To a Wild Rose" on the piano tonight. After weeks of wrestling with Mendelssohn, I flipped to the back of the book and read this off recently—and it was short and easy and exquisite.

Also, it makes me miss my flowers.

Grateful... for the opportunity not only to have a piece I arranged sung by the choir this Christmas, but—at the choir director's insistence—to direct it myself. It's an unbelievable feeling to hand people a sheet of music you've only heard in your head (and in lovely robotic midi beeps) and, with a little instruction, hear it coming to you in human voices. We have very little time, and I'm desperately short on female voices, and it's really just a short little thing—but it feels like a gift, hearing it sung.

Now I need to go spend some quality time with Evoking Sound and a mirror. Hmm. Maybe Saturday.

Studying… conducting gesture, and Hanon piano exercises, and random things I had to reference check for editing, like Scottish knives and tortious interference.

Working on... well, now that I've sent off the editing project, I promised my friend W. that I'd break up her two-plus-hours of concert recording into individual songs. And then I told B. that I'd transcribe a song and invent some harmony for it... and Christmas things need putting together... and we finally replaced our printer, so I can print off my arrangement of the hymn I need to record for my lullaby CD, which means I should be able to make the recording soon... and I'm making a second attempt at learning "Clair de Lune", which is going better than the first... and there's always those two novels that want finishing.

Loving... my best friend, to whom I spoke for the first time in months this week—spoke to for a lovely hour and a half. And Masha, who sent me several long and meaningful emails (and Christie, who has been too busy to join in). Prayer and the people on my deep and wide list these days. Book club friends who insist on having a Christmas party even when it can only be done on a Thursday night. Husbands who turn up the heat so you don't freeze when you decide to stay up all night working.

Oh, and these two: 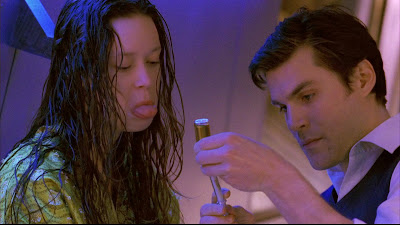 Two episodes of Firefly left to watch, and then Serenity.... and that's all. Joss Whedon, if you make me dislike Simon or River Tam, I will never forgive you. Not. Ever.

Hoping... for enough sleep tonight that I can safely drive up to Lisa's and back and then not fall asleep in my plate during Lou's company Christmas party. Because that would just be embarrassing...


Happy weekend!
Posted by Jenna St. Hilaire at 4:28 AM