Music, Mortality, and Outliving Mozart: The Whimsical Tale of a Slowly-Built Passion 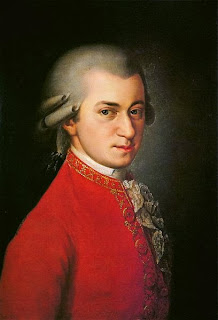 After which Mrs. Wilson said, off-handedly, “Have I missed anyone’s birthday?” I looked down at my lap, too shy to announce that it was my own tenth birthday and risk getting sung to. Several of my classmates raised their hands, and she distributed Tootsie Rolls accordingly. I was disappointed in my own cowardice, but she had given me a better gift than candy. I got to share a birthday with someone awesome.

Mozart, age 5, 1761: Little Wolfgang begins predicting his musical future by composing his first pieces, which his father notes down for him, and which are pretty dang impressive for a five-year-old (see below)
Jenna, age 5-or-6-ish, sometime in 1983-4: Little Jenni (this is before I was Jenna) predicts her musical future during Suzuki violin lessons: first, by learning off a song above her level by ear; and second, by having a fit of shyness that rendered her unable to play it at speed for her teacher**

One of Mozart's earliest works, from the Nannerl Notenbuch:

In fifth grade, my understanding that Mozart was awesome was almost entirely abstract. I'm not ashamed of that, but I am ashamed that it continued to be true until just a couple of years ago.

Mozart, age 6, 1762: begins touring with his sister "Nannerl" (Maria Anna), both as child prodigies
Jenna, age 7, 1985: Jenni (still not yet Jenna) writes her first musical poem in between reading The Chronicles of Narnia during the family moving trip from Tampa to Missoula. The poem reads and sounds like a crappy countryish commercial jingle, but it's a start.

My best defense for not knowing much about Mozart growing up is that my family listened almost exclusively to pop Christian radio. This, I should explain, was before artists like Third Day and Jennifer Knapp came along and made pop Christian radio listenable.

By "almost exclusively," I mean that I remember most of the exceptions, and I remember them as exceptions. My parents homeschooled us for all but three years, restricted TV and movies, and were very selective about whose houses we could visit unsupervised; they had pretty thorough control over what my sisters and I listened to. I assumed Dolly Parton was a naughty person who sang dirty songs until I was in my mid-teens.

To be fair, my parents let go of the stricter rules as we started graduating high school, and my dad and I actually saw Def Leppard and Bryan Adams together a few years back. But that's anticipating the story a little.

The main source of non-pop-Christian music, aside from movies, was an off-the-radio mixtape my parents had. It contained a few ABBA songs and a tune or two each by Linda Ronstadt, Don Henley and John Denver. A handful of other songs made it to my ears as well, and as far as I was concerned, they were usually made of fireworks and magic:
But my knowledge of music was still mostly limited to Christian radio. Unfortunately, aside from a few markedly sincere anomalies—Keith Green, Twila Paris, and Rich Mullins come to mind—I hated the stuff and preferred silence. I admit, however, to liking those three enough that I will still sing Twila Paris' "How Beautiful" and Rich Mullins' "If I Stand" and accompany myself on the piano. I never bothered learning "Awesome God", though.

Mozart, age 14, 1770: hears Gregorio Allegri's "Miserere" in the Sistine Chapel and, overlooking the fact that writing it down was at that time punishable by excommunication, writes it out entirely from memory. (The pope was so impressed that instead of excommunicating Mozart, he was all like, "Hey, that's cool! Write it down as often as you want to!")
Jenna, age 14, 1992: having had a few lessons, can now play Beethoven's "Für Elise" and Bruce Rowland's "Jessica's Theme (Breaking in the Colt)" from The Man from Snowy River, just like every other female piano student in Montana. On account of sharing a house with another family for a few months and being too shy to practice in front of them, however, she stops playing the piano. (NB: I was an idiot when I was fourteen.)

Nothing says "made for greatness" like a list of Mozart's childhood accomplishments. Very few people ever possess the kind of aural recognition and memory that would allow them to write out "Mary Had a Little Lamb" from memory after hearing it just once—let alone this:

Mozart, age 17, 1773: is appointed court musician by the Prince-Archbishop of Salzburg, Hieronymus Colloredo
Jenna, age 16 or 17, 1994-5: discovers that Keith Green, Twila Paris, and Rich Mullins are not the heights of musical genius

This occurred thanks to a miracle: my dad switched from pop Christian radio to country music. I more or less responded with, "I thought most music sucked? This is amazing!!"

Don't hate me! I had to start somewhere.

At seventeen, according to Wikipedia (I know), Mozart wrote the first of his works to still be widely performed today: the motet "Exsultate, Jubilate." Here's the first movement:

One of my small consolations for not knowing much about Mozart till recently is that at least my deficiency has not just been limited to the music that's most important to me. Lou and I have had the following conversation a minimum of three times:

Mozart, age 19-22, 1775-8: being under the Archbishop's employ, tosses off concertos, sonatas, adagios, and divertimentos at the approximate rate of the average junior higher's phone texts
Jenna, age 19-22, 1997-2000: joins—and eventually leads—the worship team for a tiny basement-dwelling church. Duties include: providing a weekly music lineup that satisfies both the hymn fans and the praise song fans, playing guitar, singing harmony, and shepherding a worship band made up almost entirely of youth group members, which at one point includes a tone-deaf bassist.

After spending my eighteenth through twentieth years convinced that I needed to be a country singer, in pursuit of which goal I used to lock myself in the bedroom every evening with my guitar and piano, I was given a second gift of broadened musical horizons, this time by my youngest sister. Through a friend, she'd discovered rock and alternative, and she decided I needed to listen to them with her.

I lost most of my taste for country music in short order. I still think of that sister with gratitude when I listen to Muse and Keane and The Fray, though technically we bonded ten years earlier over Lifehouse and Coldplay and Train.

Mozart, age 25, 1781: blows off the job with the archbishop in order to begin an independent career, and proves his capability by things like performing in front of the Emperor
Jenna, age 25, 2003 (approx): plays synthesizer for another worship team and discovers just how far behind she is as a musician

A handful of classical works managed to creep into my consciousness before I got myself voice lessons (at about age twenty-one): Bach's "Air", the occasional Beethoven, and Handel's "Messiah". I loved those, but classical music in general, and Mozart in particular, seemed—in the short, unrepeated clips I was prone to coming across—comparatively unemotional, and young Jenna was always about the feels.

My voice teacher, whose lessons were one of the best decisions I've ever made, taught me to like opera and classical songs. Her influence included loaning me a video recording of Mozart's opera Cosi fan Tutte. I liked Cosi, but my preferences still ran to slower, sweeter Handel arias and Scotch love songs.

At long last, I learned to love classical music when I met Lou. He introduced me to musical traditions I'd never even heard of—Gregorian chant and polyphony, which caught me, heart and spirit and imagination, from first listen—and taught me that the trick to loving classical music is in exposure; it isn't an immediate dazzle and then overplayed, like pop music, but something that grows on you as you got to know it, like a book you can read over and over again and enjoy more every time.

Mozart still took me a little longer, though.

Mozart, ages 32-34, 1788-90: despite suffering setbacks, possibly including depression, still manages to do some impressive composing, including the opera Cosi fan Tutte
Jenna, age 33, 2011: finally understands why Mozart is awesome

Technically, I was still thirty-two, but only just.

I don't recall who said, in my hearing, that “People who don’t think Mozart’s music is passionate aren't listening carefully.” They made me ashamed of myself for not knowing better, however, which is the surest way to make me learn something. Not long later, just days before Mozart's two hundred fifty-fifth birthday and my thirty-third, Lou and I saw the Requiem and "Ave Verum Corpus" at the Seattle Symphony. I finally understood Mozart that night, and loved him.

I have just four words to say for myself: Better late than never.

One of the most beautiful works of art in existence:

Mozart, age 35, 1791: returns to full productivity and writes a number of great works, including The Magic Flute, the unfinished Requiem (completed by his student Süssmayr), and "Ave Verum Corpus"
Jenna, age 35, 2013: devotes herself to piano practice and church choir, regains some of her vocal strength after several years of cord damage, and discovers a knack for choral conducting and arranging

It's been a good year for me, musically. Which is helpful, because when it comes to my writing, this year has sucked—but that's another blog post.

It's a bit humbling to realize you've outlived someone so much greater than you. It raises the question of why he had to die so young when I, who will never accomplish a tenth of what he did, am still living—but such questions are probably better left unasked. (Number 22 is germane here, however. Though I sympathize with practically all of those. Maybe not #8. But oh, gosh, #7, and #11 and 12, and #17.... ;))

Mozart composed over six hundred works, and that's just what we have on record; he was prone to not writing things down, and was so disorganized that he didn't bother cataloguing his work. After his death, musicologist Ludwig Ritter von Köchel went through the mess and did it for him.

Six hundred remembered works and six children (only two of whom survived to adulthood) are a lot for just thirty-five years of life.

I don't think I was made for great things, but I'm grateful that he was. And I'm grateful that I can sit down to the piano and fumble through his music today, two hundred and twenty-two years after he died. I won't subject you to a sample of that. But here's to Mozart, in life and in death.


* According to Wikipedia (yeah, I know), 'Amadeus' is the Latin form of the Greek Theophilus.

** I never got very good at the violin. My sisters and I had a few lessons when we were little, and I played in fifth and sixth grade orchestra. In seventh grade, when we went back to being homeschooled, I did a few trios with my sister on flute and my best friend on clarinet (which might be the worst combination of instruments for a trio ever) and then put the violin down upon falling in love with the piano. I regret putting down the violin, but not nearly as much as I regret not falling in love with the piano earlier and more faithfully.
Posted by Jenna St. Hilaire at 3:43 PM