Tessering Minds and other stories

Last week was mostly pictures; this week is mostly words, because my camera's memory card is full. But I could hardly have failed you in the gratuitous cat picture department: 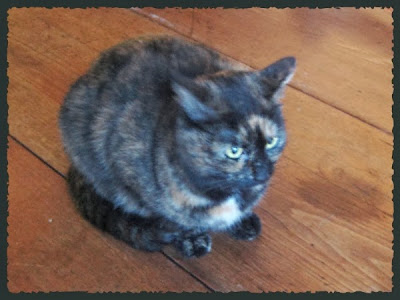 The Today meme is hosted by Masha! Join in over at Piękno, or leave your own sensory notes in the combox...

Feeling... sleepy and kind of aglow. A choral arrangement I worked up recently is hopefully going to be performed soon (!!!), in a small but friendly way, and I got so excited about its being liked and chosen that I'm afraid I was sort of in and out of sleep last night. When Lou's alarm went off this morning, I still had my rosary in hand and was hazily praying, trying to drift off properly.

Granted, I hadn't even made it to the first decade, so it's not like I prayed all night. But that's because I couldn't get further than about "Our Father, who art in..." without my mind—as L'Engle might've put it—tessering off somewhere.

Seeing... down the street, for the first morning this week. The fog lifted suddenly last night. We've had days of thick, still whiteness that often hovered well into afternoons and re-settled, after short breaks, before dusk. Morning fog is common in the fall here, but daytime fog is not; autumn is usually too windy.

Smelling... and Tasting... coffee, at the moment. With lots of cream, of course.

Listening... to—among other things, because it's been a good week for music—my old friends Naomi and Justin Boyer. You guys. They covered Florence & The Machine. With the banjo. In their kitchen. This is such a sweet little video.

I miss your voice, Nay.

Grateful... for an hour of babysitting two of my nieces this week, during which we picked flowers and swung in the apple tree and played with blocks and read "Donald Duck and the Magic Mailbox" for the who-knows-how-manyeth time.

Me, standing among the pews and calling up to three nervous guys rehearsing Gregorian chant in the choir loft: "You guys need to picture yourselves wearing cowls!"

Baritone, leaning over the edge of the loft: "Towels?"

I took in breath to call back, and then the mental image hit. And it was just so wrong for what I was trying to get them to think... The number of times I almost lost myself in a fit of laughter during the ensuing choir practice was probably unconscionable. But there's something to be said for being easily amused.

Reading… *deep inhale, dramatic pause* War and Peace. At long last. I'm kind of loving all these Rostov children, and Pierre, even if he is crazy about Napoleon.

I'm also re-reading A Wrinkle in Time, because I didn't re-read it in time for book club this week (but that turned out to be all right: we all said we loved it, and then we started debating about The Hobbit,* and... yeah), and because it's one of the primary influences on my A.D. novel.

Studying… I sat down and studied choral conducting once this week. I was very proud of myself.

Loving... my husband, who is more patient with me than I am with myself, and my little, quiet life. And fall, and music, and stories about tesseract travelers and Russian boys who tie policemen to the backs of bears, and... kind of everything right now; I'm feeling agreeable.

Hoping... for sleep, so I can stop alternating between hyper and groggy.

* Me: "I want to love The Hobbit, and I've read it twice, but I still found it excruciatingly boring..."