Stout Winds and other stories

Happy memorial of St. Francis of Assisi, who loved the animals and elements as brothers and sisters! Maia is commemorating by... burying herself in the bedclothes, because it's chilly. But here's a picture of her from the last day we had the window open: 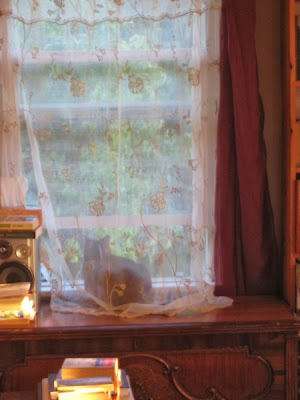 "Today" is more like "This week" here... and I added a couple of words. But it's still Masha's meme at heart. Join in over at Piękno, or leave your own sensory notes in the combox...

Feeling... exhausted. I hiked (well, glorified walk, really—it was a path along the edge of Lake Whatcom, so it was basically flat) six miles yesterday. By mile four, the family knee curse kicked in. Those last two miles were a tad rough. Day and trail were both splendid, though, and I thoroughly enjoyed all my conversations with my in-laws and Aunt Judie. It was all much more than worth having both knees muttering epithets in the background for the last hour. Next year I'll remember to bring ibuprofen.

Seeing... a little more autumn than last week. The Floridian Christie was asking for proper fall pictures the other day. The leaves are just starting to turn around town, and I'd love to walk out and get some photos, but today I can't even walk across a parking lot without hobbling (I know; I've had to do it twice.) Here, however, are the few autumnal images I could get without leaving my porch.

First: being right off the bay, we get some stout winds this time of year. I am not surprised that this hook: 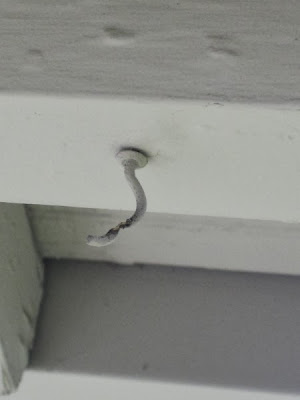 did not choose to hold this hanging basket:

when confronted with last weekend's gusts. I've got a tougher replacement hook ready to go up sometime this weekend.

The star jasmine is way ahead of everything else in getting its autumn colors on: 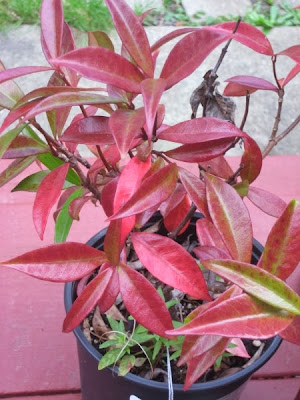 Lastly, here are some of the finally-cut pumpkins: 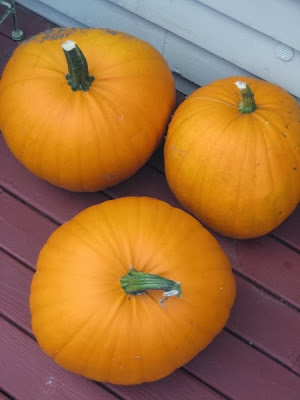 Smelling... hints of yogurt and toast from lunch.

Tasting... my favorite new meal of the week was spaghetti squash, inspired by Kristina Horner's post and commenter Emily Hornburg, who suggested topping said squash with bacon, ground beef, tomatoes, and cheese. I cooked up some bacon, drained the grease, browned the ground beef and some mushrooms in the bacon pan with some sherry and garlic salt, added a few tomatoes from the garden, mixed some shredded cheddar into the hot squash and ladled the beef/bacon mixture on top, and sprinkled the whole thing with parmesan. The result? Squash even Lou could love. I will be making that again, oh yes.

Listening... to Faure's "In Paradisum", from his Requiem; I'm learning it with a treble schola for an upcoming concert. It's... well, heavenly.

Grateful... for MuseScore. It's wonderful and it's free. Writing music out is more helpful for my sightreading than reading alone ever could be. It's also helpful for when choral composers write perfectly good church hymns all in unison. What is the point of that?! I've spent way too much time this week on SATB voice leading, but haven't begrudged a minute. It's almost as much fun as conducting.

Silly composers. You skip writing parts for your hymns, and Jenna will do it for you.

Reading... still The Hollow Hills by Mary Stewart. It's hard to get a lot of reading done when I'm trying to do so much writing.

I'm adding these next two in hopes that I'll get more done if I have to admit to failure or success every week:

Studying... Evoking Sound by James Jordan. I meant to work on it at least two or three days, and only got to it once, but I have been practicing consistent tempo every chance I get, and the rhythm layering concept is fascinating.

Working on... (still) chapter three of my fairy tale retelling; I've had to go back, rip into a scene, and rewrite it to different emphasis. But this is chapter three of nineteen. All of which I want to have done by sometime in December. I need to get caught up into it—it goes so much faster when I do—but I'm honestly so burned out on novel writing right now that everything is harder than it needs to be.

Loving... my confirmation saint, St. Thérèse of the Child Jesus and of the Holy Face. Tuesday night I made a nice dinner, and Lou brought in some little flowers: 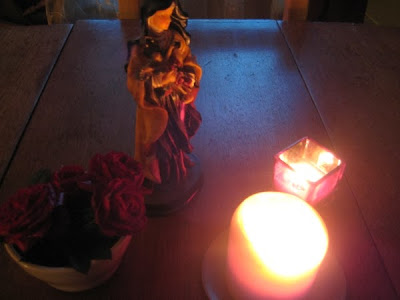 St. Thérèse and St. Francis, pray for us!

Email ThisBlogThis!Share to TwitterShare to FacebookShare to Pinterest
Labels: ...and other stories, today