Serious Free Time and other stories

I am home. Where it has rained hard the last two days and been so dark that I've had lamps on all day. But I was so glad to see Lou, who brought these along in picking me up at the airport: 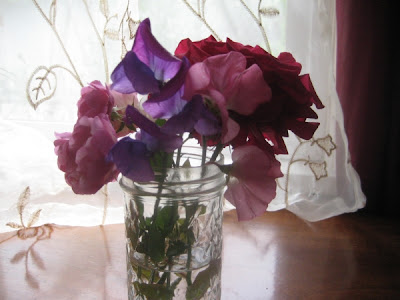 Vacation being officially over, I'm going to spring some blog changes on you. But first, cat picture:

I can also assure you that the Harry Potter Book Club should continue as begun.

Now that that's settled... I've decided to put myself through some serious study of music and Spanish (and probably get more into literature as well, eventually) as well as gritting through my authorial burnout and finishing some novels. For that, I need to free up a little time. I love blogging, but like most art forms, it'll suck up all the space and time and energy allowed it. :)

What this mainly means for you is shorter posts. Last week's abridged review of The Crystal Cave took me a quarter of the time most book reviews take me. And Friday posts will probably become less blather among the pictures and music. It's hard for me to imagine anyone complaining about that....

What this means for me is that I'm devoting fall quarter to finishing the novel I have under contract (the other's getting relegated to spare time for the time being), studying through James Jordan's Evoking Sound since that was loaned to me (and since it's awesome), and spending a little time every day learning Spanish and sightreading, both of which I have plans for much more immersive study in future. I'll spare you the enumeration of my ever-so-specific scheduling and like details—they aren't likely to interest anyone but me—but you might get progress notes. :)

If you need further reasoning for all this, Christie wrote out my underlying thoughts beautifully just yesterday, apparently by way of either Vulcan Mind Meld or the principle of great minds.

This post is turning out a bit long, but I haven't written in a week. I mean to behave with more brevity henceforth.

The visit to Florida was about as lovely and ideal as it could possibly have been. Apart from a slight delay on the return, all my flights were smooth—and beautiful: 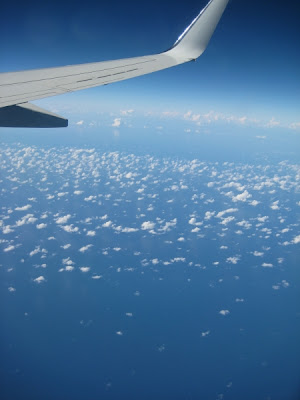 I am grateful to YD for the First Rule of Wilderness Guiding, which works equally well for air travel when one can pack light enough to make it possible. (Trips to Florida in summer are great for light packing.) That is: Never get separated from your gear. I didn't even put mine in the overhead bins. It made flying much less stressful.

Also, ear plugs. They were my salvation from that sharp inner-ear pressure during landing and from not being able to hear properly for 24 hours after flying. I mean to use them every time I fly in the future. 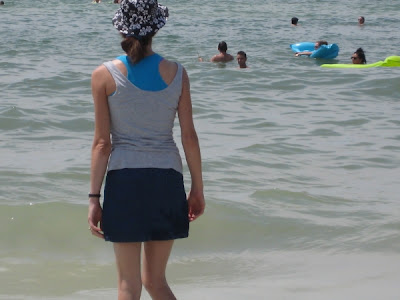 Favorite Florida memories include:
It was a beautiful trip. I couldn't quite cry at goodbyes—they were too rushed, and involved airports—but several times along the return, the partings hit me and my eyes welled up. I miss my family.

Music of the week: Audrey Assad's "I Shall Not Want", from her new album Fortunate Fall. You all know I have a terribly up-and-down relationship with modern sacred music, especially of the pop Christian variety. Well. This is one of the ups. Half litany and wholly peaceful, underscored by sweet mellow piano, with a lyric pointed right at my own biggest weaknesses, it put me in tears. Enjoy.

Happy weekend! I plan to be back with some Harry Potter on Monday...
Posted by Jenna St. Hilaire at 3:31 PM