All right, magical friends! Who wants to help me de-gnome my garden?* 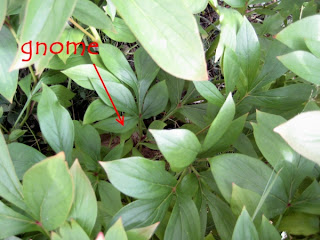 Make sure and bring your leather gloves; the gnomes bite.

Before we get up to our elbows in peony bushes, however—well, any more than I already have—we've got to cover last week's book club entries. Masha commented on Harry's lack of confidence in love:


Harry is home again, hating his family, longing for escape, and anticipating another school year with friends..but uncertain again - he never really knows where he stands in the magical world, or the hearts of his friends. He wants certainty that can’t be given in this world, he lacks trust - a faith in the goodness and consistency of those he loves. It’s sort of a common thread for Harry throughout the books - like most of Rowling’s characters, he doesn’t love confidently or consistently..there are too many doubts and resting demons he can’t overcome.

To which Christie responded, among other commentary:


I remember writing early on about the horror of Harry's upbringing and my subdued surprise that it hadn't affected him more severely.  Children raised in such a home, outside of the fictional world, would almost certainly have deep emotional wounds and problems with delinquency.  Here we start to cast light into the deeps of Harry's woundedness, of which, so far, we have not much left the shallows.

I'll be interested to see further thoughts on this as the series progresses. Harry isn't wholly child either of realism or fantasy; he's neither paragon of virtue, nor profound and pathetic victim of abuse, and yet, in some ways, he's both. The story itself sits in a weird place, really; it combines myth and humanity into a light tragicomedy that is simplistic at one moment and startlingly thoughtful the next.

It might be interesting to compare Harry to Dudley in, say, book five. And there'll be lots to talk about in book seven, of course. :)

On to this week's reading!

P.S. It's really hard to take pictures of yourself de-gnoming. I think this girl did a better job than I did.


Read: Harry Potter and the Chamber of Secrets, chapters 2-3

I'm afraid that if I say anything about Dobby, there will be SPOILERS. Masha tells me that his existence, and that of his race, are problematic (see combox at the link)... and I can't argue yet, because I don't know what she means. ;) So far, however, we've got what is really a beautiful scene in retrospect—the way Harry treats Dobby, and the way Dobby responds, are quite powerful in context, but I can't describe it properly, because it would spoil half the plot of the book. Ugh. Frustrating. There's more to come when we get to socks.


2. Uncle Vernon's racist joke (page 18; we're not told either buildup or punchline, just that it's about a Japanese golfer.) Is Uncle Vernon a racist because he's a jerk? Or because he's uneducated, or ignorant in that arena at least? Or because Rowling, like too many people from left of the political center, believes that everyone right of center is a racist? Or is it just a throwaway sign of Uncle Vernon's overall nastiness and distrust of anyone different from himself?

3. Molly Weasley. Now and again a Potter fan doesn't, but I love Molly just as she is—domestic, poor and thrifty, busy to the point of being harried, open-hearted, and so driven by old-fashioned, faithful love that she shouts at her sons for breaking rules to rescue Harry and then welcomes Harry warmly, though she barely knows him, in the same scene. I'm not a fan of yelling in a household, but there's a difference between yelling fueled by grudges and contempt, and yelling fueled by warm temperaments inside the security of a solid, tested-and-true commitment. As an extremely conflict-averse introvert, I can't quite comprehend it myself, but some families seem to thrive on bickering and raised voices at levels that would drive the rest of us into insanity.

4. Arthur Weasley. Here's one of Rowling's most delightful contradictory personalities; a poor government employee with seven children and a ramshackle country house (hard to comprehend in America, or at least in this part of America, where government employees may get paid three times what private laborers do for the same jobs), a man who heads the Misuse of Muggle Artifacts office at the Ministry of Magic and tinkers magically with said artifacts in his own shed. He's a good complement to his wife: worn, often a little stressed, but eternally cheerful and never tempestuous. The Potter series isn't exactly laden with good father figures, but Arthur Weasley, despite his handful of flaws, is one of the greats.

5. De-gnoming the garden. All right, this is a funny scene, but I always feel sorry for the gnomes when they walk away with their shoulders hunched. Even though they're stupid and vicious.** Ron presumes they don't feel pain, which I might be more inclined to believe if Ron weren't so desperately prone to believing just what he wants to believe on such subjects. More on that later, too.


Update: 6. The Burrow! How did I forget the Burrow? And now I don't have any time to talk about it, except to say that this first visit to it is one of the beautifully magical parts of Rowling's worldbuilding, and I understand why Harry thinks it's the best house he's ever been in.

Anything I overlooked? Got thoughts on chapters 2-3? Put them up for discussion!


* Muggle moment: I'd as soon have gnomes as slugs.
** I've never figured out a good way to kill slugs, either.
Posted by Jenna St. Hilaire at 5:06 PM