Technically, today's topic is "Favorite books I read before I was a blogger." For that, however, all I have to do is refer you to this list. I'd not read all fifty of those books before ever becoming a blogger, but you can find the top ten in the top thirteen or so.

On account of which, I'm choosing my own topic today. This one is dedicated to my sister Beth, who has been asking for it for probably a year.


There are two difficulties with this topic: first, that some of the best animals in fiction are not pets. The horses Bree and Hwin would be so offended at being called pets that I almost feel like I should include Shasta and Aravis on the list. There's a reason that book is called The Horse and His Boy.

Second, that I'm almost guaranteed to forget some and later have to smack my forehead in the comments box.

1. Dog Monday from L.M. Montgomery's Rilla of Ingleside. For waiting out World War I at the station, watching every incoming train for his beloved soldier. Less honorable but still enjoyable mention goes to the cat Dr. Jekyll-and-Mr. Hyde.

2. Crookshanks from J.K. Rowling's Harry Potter stories. With honorable mentions to Hedwig and Pigwidgeon, both of whom I loved—but the part-cat part-kneazle Crookshanks was exceptionally smart and helpful, especially when it came to figuring out whether dogs and rats were really what they seemed to be.

3. Rowdy from Wilson Rawls' Summer of the Monkeys. The quintessential good dog—a patient floppy-eared hound, prone to hiding under the porch when frightened but always up for an adventure with Jay Berry Lee.

4. Rusty and Joseph and the Sarah-cat from L.M. Montgomery's Anne of the Island. Two scrappy misfits and a queenly creature, all feline, all learning to keep house together.

5. The dog Wrolf from Elizabeth Goudge's The Little White Horse... though I suspect Wrolf would not appreciate being called a pet, either, and I probably ought to stick with Zachariah the cat or Serena the hare.

6. McGinty from L.M. Montgomery's Pat books. Montgomery apparently had a soft spot for loyal-hearted little dogs. As do I.

7. The merrel from Robin McKinley's Spindle's End. For being a good conversationalist and ultimately protecting Rosie in a crucial way. There are a lot of good pets in that book, too—horses and dogs and cats and mice and even, weirdly enough, a spider.

8. Old Dan and Little Ann from Wilson Rawls' Where the Red Fern Grows. I barely remember this book, which is surprising when I consider how many times I read it in sixth grade, but I do remember there being a great deal of eternal love and loyalty between these two hound-dogs.

10. Pongo and Missis from Dodie Smith's 101 Dalmatians. Technically, they wouldn't want to be called pets either, but they can argue that with the Dearlys on their own time. Also worthy of mention are Perdita, several of the animal helpers who aided Pongo and Missis on the search for the puppies, and some of the puppies themselves.

Honorable mentions to Pilot from Jane Eyre, Jok the gander from The Goose Girl, the milk carton from China Mieville's Un Lun Dun, annoying little Gwin the marten from Inkheart and sequels, and the three-legged horse from The Hero and the Crown.

Maia insists upon being mentioned as well, having refused to listen to my explanation about this being a matter of reality versus fiction. I don't think she believes there's a difference. 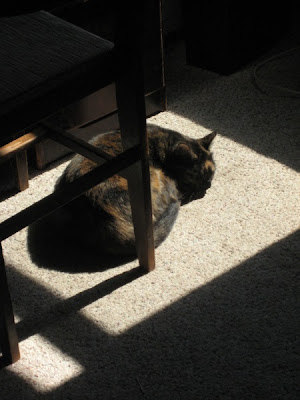 Back to the post... apparently Montgomery writes more about pets than most authors, though McKinley does well, too. Lewis gave major story roles to a lot of animals who were not pets, including making one of them Narnia's God. For myself, well—no spoilers allowed for not-yet-published works, so I'll just say this: I guarantee that if I had written the Divine Comedy, there would have been some goodly birds and beasts in Paradise.

All right, what pets have I overlooked?
Posted by Jenna St. Hilaire at 5:04 PM