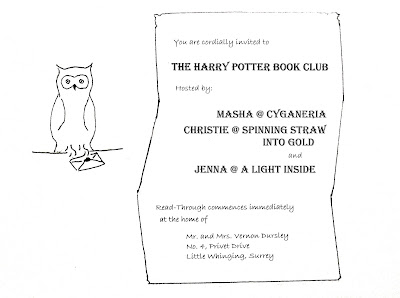 This is not just any thoughtful, playful, highly interactive read-through, either. It's an extensive conversation between three disparately-experienced readers: one longtime Potter fan, one longtime not-a-Potter-fan, and one new reader of the stories. Ideally, it will be intense—and magical—and legendary—and fun.

Details follow, but first, allow me to introduce your hostesses: 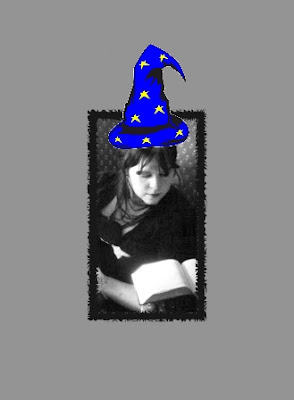 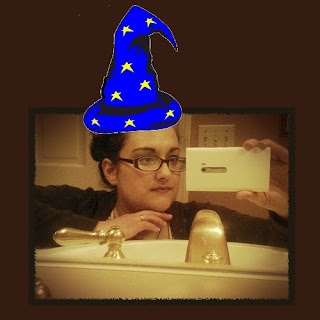 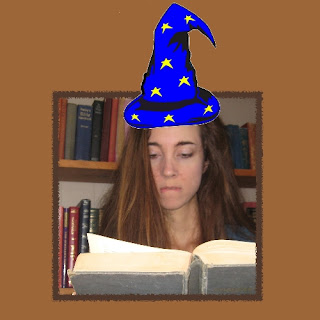 That's us! I should note that we are all Catholic, so faith will come up from time to time. Religion is not a requirement for the festivities, however, and we certainly hope you'll be able to enjoy yourself no matter where you're coming from thought-wise. I should also note that I made up all the dossiers myself, so, Masha and Christie, hopefully I didn't get your factoids wrong. xD

How does one go about introducing famous Harry Potter, whom so many of you already know? And about whom so much has been said, written, presumed, cogitated, formulated, debated, and analyzed? Harry has inspired thousands of essays, songs, fan sites, a large number of books, at least one activist organization, and conversations beyond number. Little kids in third-world countries read Harry in his day. Prisoners on Death Row read Harry in his day. And apparently the British Royals have read their Harry, too:

This despite the fact that it at least begins as a children's story—which is very obvious in book one, and Rowling grew the story up in later books without significantly raising her style. But C.S. Lewis said, "I am almost inclined to set it up as a canon that a children's story which is enjoyed only by children is a bad children's story. The good ones last," and Rowling apparently agrees. She gave adults plenty to play with: puzzles, games, alchemical symbolism, wordplay, mythology, humor, irony, politics, a detailed world to explore, and a tale that is all but overtly Christian and sacramental, if you know what you're looking for, though it's not so overt that it reads as exclusive to non-Christians or to those whose faith more or less rejects sacramentalism.

And now, since we're Catholic and this comes up: To the very best of my knowledge, the Catholic Church's position on the Potter books is open. You can freely read them or not read them. There have been no official warnings that I am aware of, with official meaning "coming from someone with the authority to make such a call for the Church at large," e.g., a council of bishops. Fr. Amorth's opinions are just opinions. Diplomatic letters from then-Cardinal Ratzinger to the author of an anti-Potter monograph are just diplomatic letters. L'Osservatore Romano is presumably impartial as it has, I believe, run articles on both sides of the debate. Michael O'Brien is a naughty dragon-hating Muggle who ought to go work for Charlie Weasley for a while. Harry Potter numbers plenty of Catholic priests among his fans—try the Secrets of Harry Potter podcast, created and originally hosted by Fr. Roderick Vonhögen, if you're curious—and plenty of popular Catholic bloggers, too; here, since my own name isn't big enough to drop and make any noise, I'll name-drop Mark Shea. You can be a good Catholic and a good Harry Potter fan. It's legit.

Dealing with the Bible directly is waaaayyyy too complicated for this segment, but if I believed that the Bible and Harry Potter were in any real conflict, I wouldn't be championing the latter all over the planet. The books are carefully distanced from common modern superstitions and are absolutely free from invocational sorcery and spiritism. The wizardry in Harry Potter is sort of a parody of a fictive exaggeration of a reality. Like Tim Allen's movie Galaxy Quest, which spoofs not space travel itself but science fiction, Harry's wands and cauldrons and spells are playful takes on the (Disneyfied) fairy tale depiction of magic, which itself is artistically removed from actual paganism. The studies, charms, potions, etc. are often downright funny. 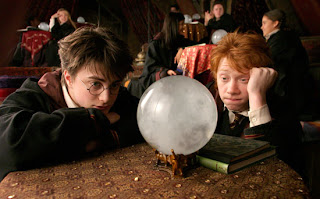 'Would anyone like me to help them interpret the shadowy portents within their Orb?' she murmured over the clinking of her bangles.

'I don't need help,' Ron whispered. 'It's obvious what this means. There's going to be loads of fog tonight.'

And that's all I've got on that subject for today. Those of other denominations and religions should of course look to their own authorities. :)

Back to the books themselves: I think my best chance at introducing the beloved story any further is to say a few words about the first chapter—that grand little first chapter, which still gives me a nostalgic thrill.

(Unprofessional fangirl aside, made while listening to Ministry of Magic: You guys. I haven't read these books through in years! I'm practically in tears, I'm so excited. :))


Prelude to Sorcerer's Stone, Chapter One

First-time readers aren't told this yet, but the date Mr. Dursley faces off with map-reading cats and men in violet cloaks, running afoul of his destiny with the strange and mysterious, is November 1, 1981. This story, themed upon the fact of death and the question of how to face it, begins on All Saints' Day. This first chapter focuses backward a few hours to Halloween night, on which an evil wizard attempted to murder a baby and vanished when the curse rebounded. Little is yet revealed of how, or why—the cruciform Lily, the twisted snake, and the finer points of that clash between a self-destructed soul and an innocent, whole one are all secrets held by the next few thousand pages.

Mr. Dursley is a good introduction to the fact that most Potter characters at least begin as caricatures. He lives a safe, outwardly respectable suburban life, making a tyrant of his child, married to a woman who offers little more than skinny, horsey, cheap-magazine beauty and a knack for spying on the neighbors to make sure no one is more respectable than the Dursleys. It's telling that he's so completely wrapped up in this superficial life, so shielded from imagination, that despite all the cloaks and owls and shooting stars and cats, neither Halloween nor saints ever seem to come to his mind. It's just another day to the Dursleys.

And then, his opposite appears on the corner of Privet Drive: someone who makes friendly room in his life for the strange and mysterious. Albus Dumbledore shows up in a colorful cloak with buckled boots, long hair and beard, and his gentle, empathetic sense of humor at hand despite obvious grief at the loss of a couple he had been trying very hard to protect. He made himself a hero of mine from his earliest dialogues. Say what you like about Rowling's prose, mock her work as derivative (I'll growl, but I won't necessarily attack), complain about her punning names (but why, when it was so obviously intentional?) or her minor inconsistencies (they happen), but I can't imagine anyone getting away with calling Dumbledore anything less than a brilliant, complex character who is absolutely unique and thoughtfully developed throughout the series.

Rubeus Hagrid is worth noting here because his alchemical significance makes him one of the most important secondary characters in the series. Thus far, he's just a little like Giant Rumblebuffin—big and clumsy and slightly baffled by life, but innocent and loving.

Lastly, there's our Harry: fifteen months old, asleep in a basket, and unaware of the new name he's been given—the name he'll be called again and again, right through the climax of the last book. The Boy Who Lived.

Lived. Not "survived", though that would admittedly have had less ring to it. The sixteen years between Harry's first encounter with Voldemort and his last are under too much shadow to be much of a life as we selfish Westerners imagine it—being happy, doing what we want to do, being free. Harry is never really free. But despite the destiny, the bonds, the duties, the weight on him, Harry's entire journey will be accomplished in the learning of courage and love—and with those two virtues, his life is more a life, more lived, than many a one that is completely independent and free.

As for what happens after that, I won't yet say. You'll have to read the books. If you haven't, of course.

UPDATE: Keeping in mind that some of the readers, including our Christie, have not read all the books, please use spoiler warnings when discussing future plot developments in comments and linked discussion posts.

* Look at me, making up Potter spells! From exordium, meaning the beginning or introductory part, especially of an essay or thesis. :)
Posted by Jenna St. Hilaire at 1:26 PM