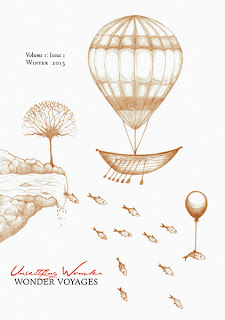 First, big news: the inaugural issue of Unsettling Wonder is out, themed around the concept of Wonder Voyages! There are some lovely stories in there. I know that for a fact; I'm the associate fiction editor.


In offering you these stories, we hope that they guide you on a voyage of imagination—if not from island to island in goatskin boats, then from story to story, to new lands discovered by story. I do not promise they will change you. But you will, I hope, discover something new, even indescribable.

Print and digital editions are available. I'm looking forward to my own copy coming in the mail!

Now, back to scheduled programming: the top ten settings I'd like to see more of in fiction. This is a tough one for me because I favor high fantasy, where the two important rules for setting are: 1) use your imagination, and 2) use the heck out of it.  I'll try to come up with a list nonetheless. It just might be abstract.

1. The Epic Landscape. Scenery expansive and varied enough to take in whole cultures and multiple plot lines and enormous series. Think Tolkien's work, or Jordan's—from the flowers and treehouses of Lothlorien to the mines of Moria, from the river-island of Tar Valon to the plains and walled cities of the Borderlands. I just finished the Wheel of Time, and I need another large-scale saga with a fascinating world.

2. The Beautiful Wonderland. Magical worlds with an emphasis on the lovely. Shannon Hale's teen heroines live in such places, and Maria Merryweather enters the exquisite Silverydew in The Little White Horse. Lewis' Narnia is glorious, and even Montgomery's handling of setting, notably Lake Mistawis (The Blue Castle), belongs fairly in this category. The land traveled by the boy in Paolo Coelho's The Alchemist is yet another, as is Cornelia Funke's Inkworld.

3. The Ambiguous Place in Time. This is the world that may or may not be on Planet Earth; it's not specifically tied to any location in the universe or any time period. Sharon Shinn's Auburn is an example of this, as is the world in The Wheel of Time. "In one age, called the Third Age by some, an Age yet to come, an Age long past, a wind rose in the Mountains of Mist...."

4. The Unknown Planet. Here's where my taste for sci-fi drops into the mix. Someplace in the unexplored heavens, unfamiliar peoples work unfamiliar lands—on Lewis' Perelandra, for instance, or Card's Lusitania (Speaker for the Dead). This is a great way to set up a world with unique rules and features.

5. The Undersea Paradise. I am on a quest for a good mermaid book. It needs to have strong, sensory worldbuilding, lovable characters, and a meaningful concept, which combination seems unreasonably hard to find in the little world of mermaid fiction. Granted, I haven't read the entirety of said world yet.

6. The Far Side of the Portal. This is a common urban fantasy concept, but is not often done to my taste, mainly because most writers are light worldbuilders by my standards. The portal concept is as follows: step into a wardrobe in the English countryside, and voila! There's a world through there. Platform 9 3/4 is likewise a perfect example.

7. The Artists' Guild. I'm a writer and musician, and I have dabbled in both drawing and dance—and I love to see the arts and artistic gatherings in novels. Love, love, love. Artists have a way of turning their associations and spaces into settings with distinctive personalities. Sometimes these form the primary setting, as in Erin Morgenstern's The Night Circus. Other times, they're small aspects of the larger world but important to the story, like the musicians' nightclub in Patrick Rothfuss' The Name of the Wind. Either way, this is one of my favorite things to find in a tale.

It's likely that I could go on, but it might take more hours than I've got to give. What settings would you like to see more of in fiction?
Posted by Jenna St. Hilaire at 1:16 PM