Remembering Joy and other stories

Lou came across my former voice teacher's obituary this week, and though it's nearly a year old, it was news—and I had to stop and cry for a little while.

She taught me for at least eight years, though I didn't always practice as I ought. I remember her making me sing in German so I'd develop good diction, and I remember her assigning me 'The Lonely Goatherd' from The Sound of Music, just for kicks. I remember her enthusiasm for each of her students. And I remember her out in the sun with the pot of flowers I gave her when she stopped teaching, smiling and full of life despite having to make such a grand concession to arthritis and age. Look—she was always like this: 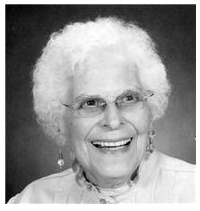 Mrs. Lorente, your splendid, persistent joy in life and music encouraged me every time I was around you. Thanks for the years of lessons at a rate I could afford, for teaching me not just the principles of vocal technique but your belief that music is something not to perform, but to share. Thanks for so faithfully being the artist and the cheerful spirit God intended you to be.

"My, how you will delight the angels!" 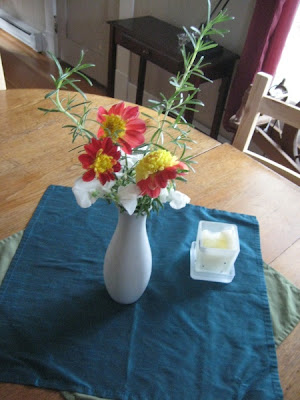 Also, these autumn crocuses, which are apparently called 'naked ladies' (I don't even want to think about what that admission is going to do to my blog's Google statistics). They get that name because of the absence of foliage, which comes up in the spring and then dies off before the flowers arrive.

They look so otherworldly to me, with that pearl-white stem and lack of greenery: 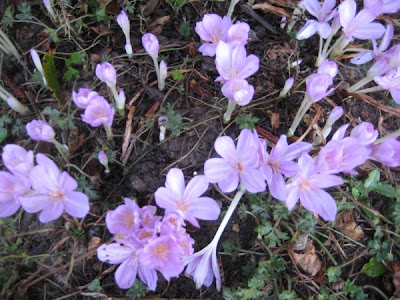 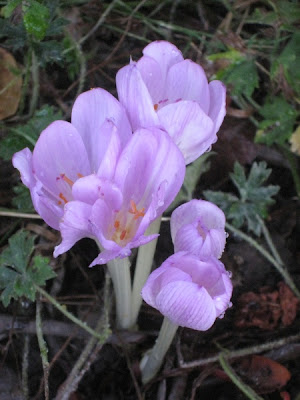 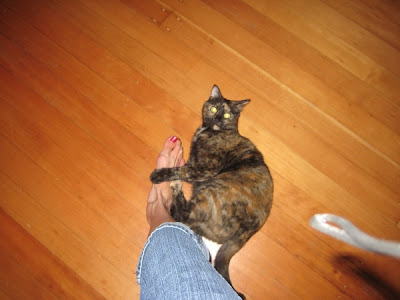 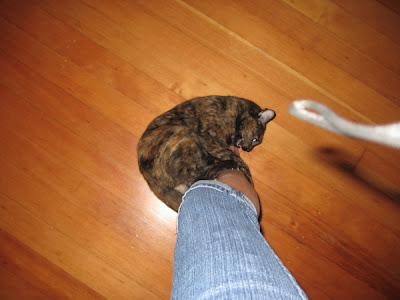 Thanks to Arabella for letting me know that an early Madeleine L'Engle book has been made into a movie by L'Engle's goddaughter! I've not read Camilla, but would love to both read it and see the adaptation. Here's hoping heiress Cornelia Moore finds distribution for her film.

Writers' link of the week: Great SF authors talk about setbacks in writing, and how to overcome. I sympathized with Connie Willis, and need to remember to take her advice.

Music of the week: At one point Mrs. Lorente decided, for fun, that I should learn the love aria to coffee from Bach's playful Coffee Cantata, a comic opera he wrote for his children. As the story goes, a determined father tells his daughter that he will only find her a husband if she gives up coffee, and she secretly swears that she will accept only a suitor who promises to allow her to drink it.

The aria is freakishly high and I never did get much good at singing it, but here's a lively rendition from someone who can reach all those notes.

Random amusement of the week: Gideon Lewis-Kraus on our fascination with internet cats: Quote:


The reason the lolcat says “Oh hai” is because he only just noticed, and certainly doesn’t care, that you caught him serenely occupying ur nouns, verbing ur other nouns. He doesn’t worry about you or what you think; by his living in your screen, you can love him, but there isn’t a prayer of reciprocation. Thus is the Internet cat the realest cat of all.

Never fear, Internet! Maia's every bit as concerned about what you think as she is about what I think.

And now I've not only got a house to clean, but half a friend's book to edit by next week and a deck to scrape and paint while it's sunny. I'm off. Happy weekend!
Posted by Jenna St. Hilaire at 1:34 PM