Harvesttime Quests and other stories

Huckleberry picking is next week. And as much as I love blogging, y’all—and I really do—it’s a lot easier when I have internet access. Therefore, I’m taking Monday through Wednesday off. The blog should return next Friday, with huckleberry-picking pictures if I don't forget to bring the camera.

Thanks, everyone, for the happy anniversary wishes from last week! It was. 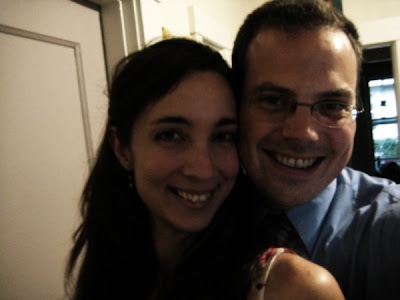 Having gone out to dinner just days before, we decided to stay in and grill steaks, which meant that I got to have fun with the decorations. 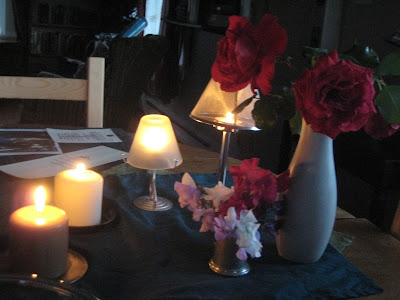 Lou took the pictures. Candlelight photography has never been my gift.

In other news from the week, Bellingham has had a proper heat wave for once:

That was today. I just went outside and panicked because some of the leaves were drooping on my pumpkin vine. Fortunately for the garden, it's supposed to cool down a little after today, but I've missed hot weather so much that I only complained once, and only halfheartedly, while standing over a stove boiling blackberry juice to rubber last night. (Oh, the quest for the mythic 'jelly stage', which dwells somewhere between syrup and rock candy. We'll see whether I succeeded when I open the first jar and try to spread the contents on a plate of biscuits.)

I do find myself liking the adventure of harvesting and preserving. Mom and I canned five quarts of apple cider—the product of our big old Transparent tree—yesterday, as well as plum jam. All you L.M. Montgomery fans, remember from Anne of Avonlea that "Davy had no sorrows that plum jam could not cure"? I believe he was caught swiping spoonfuls from the cupboard once, too. Well, now I know why. Methinks I need a plum tree.

Writers' link of the week: By posting this, I feel guilty of the 'indirect boast', which Mr. Darcy applied to Mr. Bingley as follows:


"Nothing is more deceitful," said Darcy, "than the appearance of humility. It is often only carelessness of opinion, and sometimes an indirect boast."

"And which of the two do you call my little recent piece of modesty?"

"The indirect boast; for you are really proud of your defects in writing, because you consider them as proceeding from a rapidity of thought and carelessness of execution, which if not estimable, you think at least highly interesting."

Still, I liked this Pearl S. Buck quote, and I have a feeling that most of you fellow artists will, too.

Music of the week: In honor of the Feast of the Assumption, which was Wednesday, Ave Maria.

Random amusement of the week: Arabella sent me this comic as reminiscent of Maia. The concept is funny, but it's the posture and expression of the cat in the front that's the kicker. Also, the artist is apparently fond of making cat cartoons, so there's more to see.

I'm off to clean house, make dinner, and water the garden! Happy weekend, and have a pleasant next week as well.
Posted by Jenna St. Hilaire at 4:42 PM