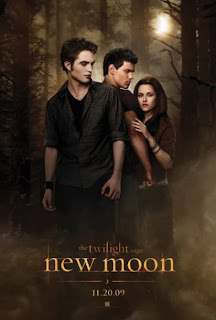 Lou took me to see this a few weeks ago, and as a movie review post tends to take a lot of time to write, I've procrastinated. I did get a short piece up at The Hog's Head celebrating the faithfulness of the movie to the book, but here I'll talk details. Spoilers ahead!

New Moon being my favorite novel of the four, the movie could have seriously bombed for me. It did not. I liked it, and so did Lou. (Lou, good man, likes the Twilight movies better than the Potter movies. So do I, though in a battle of the books, I think Potter will always win for me.)

The four blank chapters in the novel, titled according to the four months they represent, could have been very difficult to communicate in movie format. Weitz and crew did a fantastic job.

The worst part of the movie experience for me: Sitting in front of the sort of girl who gives Twilight fans a bad name. She kept up a steady run of insinuating commentary throughout the film--out loud. 'Really,' I wanted to tell her, 'I know both the leading boys took their shirts off--but I managed to sit through it without swooning. Can't you?'

Though I consider myself firmly Team Edward, I have to say that the movie (and Taylor Lautner's good work in his role) made Jacob seem a lot more relatable than Edward. Not so in the book. That scene in Eclipse where Bella breaks her hand punching Jacob in the jaw? Yeah, I'm right there with her on that.

Favorite scene: The little flash-forward where a transformed Bella runs with Edward through the trees. Kristen Stewart makes a lovely sparkly vampire.

I found all the cinematography quite beautiful, but especially the vampire and werewolf action scenes, which usually happened in the forests. Being from the Pacific Northwest, I love getting to see this area displayed so splendidly on the big screen.

Leaving out Catherine Hardwicke's old-movie-style clips made for a little discontinuity between the films, but New Moon was still too well shot for that to greatly bother me.

Bella jumping on the back of the stranger's motorcycle made my one big quibble with the movie itself. She rides off with a catcalling guy she doesn't know ... and he brings her back? Hardly believable.

I did miss Carlisle actually stating his belief that he and his family are not necessarily damned. At least Bella said it.

The Volturi scene had too much action in it for me, but Dakota Fanning makes a perfect Jane. My goodness, that girl can act.

Overall rating: Definitely worth the $9 it cost to see it. At least, for those of us who like Twilight. Feel free to add your own impressions in the comments.
Posted by Jenna St.Hilaire at 10:53 PM