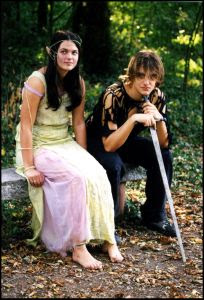 Despite my adoration of the world of faerie, as seen in numberless re-reads of things like Harry Potter and Narnia and The Little White Horse, I honestly do not read a lot of fantasy fiction. I have several reasons for my lack of loyalty to the genre, with "impossible character names" at the top of the list.

Fantasy and sci-fi character naming is a whole art in itself, encompassing linguistic study and all sorts of rules about consistency between worlds and things. Unfortunately, to me it tends to read like walking into one of those neighborhoods where the parents attempt to outdo each other on weird names for their children. The writers of fantasy often draw names from foreign sources or make them up altogether, which makes the characters immediately more difficult to identify with and almost always less memorable.

Admittedly, Tolkien's Middle-Earth work is a linguistic achievement like no other. But even for Tolkien I had to read The Lord of the Rings twice and watch all the movies before I could remember the minor characters' names. As for Potter, I read the first four books before finally asking someone how to pronounce Hermione, and it then took me ages to get "Hermie-own" out of my head. Even Hermione's own attempt to explain the pronunciation of her name to Viktor Krum did not help much; it needed emphasis. Her-MY-oh-nee.

I don't really think about genre when writing, but having several worlds puts me in the category of fantasy--high fantasy, of all things, since there is no earth-as-we-know-it. Which leaves me with a conundrum: Should I attempt linguistic genius? Or make the names memorable and relatable?

Right now I have chosen the latter, with some respect for the former. In an attempt at both memorability and consistency, I'll give the natives of any world Anglicized names derived from the same root language. I actually have comparatively few named characters; unfortunately, most of the minor ones need renaming. But Mr. Ian Woon gets to keep his name.

"But Jenna, one would think you'd have gone through all this before you wrote the book!"

Right. Well, one would think.
Posted by Jenna St.Hilaire at 3:40 PM