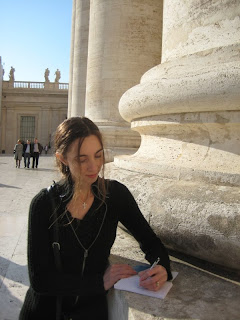 Thirty days ago I began NaNoWriMo at the base of one of the columns outside St. Peter's Basilica. The program ends tonight.

Right now I'm just aglow. I am in love ... throw-back-your-head, fling-out-your-arms, tell-the-whole-world in love with this book. I finished the rough draft last night and am thoroughly happy with the way it turned out.

Yes, it has plot holes; yes, it contains appalling sentences that I hope no one ever knows I wrote; yes, everything happens too fast; but far more came together than I expected and it wound up making itself the sort of story I don't want to put down because it gives me such happiness. It needs a little work, I think, before anyone else will get that feeling from it, but at least I've a start.

For your reading pleasure (or at least, my listing pleasure), here are notes on the experience and the story itself.


Worst things about the story:

Best things about the story:


Number of cheats used: None, unless you count flinging around the adjectives and the passive verb and other comparatively useless parts of speech without discretion.

Great WriMo moment: Including Mr. Ian Woon. He lives on the Moon. I am inordinately proud of that fact.

What's next: My goal today is to make a quick scan through the story, highlight things I love and things I want to change, and then put it away for a few weeks before starting to overhaul. I am very anxious to do my best by my beloved little tale, and bad revision can kill off all the best parts of a story without fixing the problems, according to Holly Lisle. This absolutely terrifies me. But I hereby commit myself to making a full revision. That's a promise.

Posted by Jenna St.Hilaire at 3:12 PM

Email ThisBlogThis!Share to TwitterShare to FacebookShare to Pinterest
Labels: NaNoWriMo