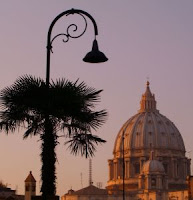 This will probably be my last post for a couple of weeks, as our plane to Rome takes off before my next standard posting time.

As a human, as a Christian, as a writer, as the daughter of an artist, as an American, as a woman who thinks cheese is second only to chocolate in the list of greatest foods--Italy holds all sorts of interest for me. When I come back, I plan to have pictures and stories to share.

NaNoWriMo begins just days into our trip. The thought of 1667 words per day makes me nervous--but less so since yesterday. Not convinced of my capability, I pulled out my non-NaNo story, picked out a plot point, and in less than an hour wrote 1683 words. I can do this! Provided, of course, that I do not give in to the frequent temptation to stop.

I admit, shamefacedly, that one of the things I'm looking forward to in Rome is a short break from the internet. At the bottom of Jennifer F.'s scorpion story (linked yesterday), I found the link to her post about 20 things learned in a week without her computer. I empathized with much of it. Full-time connectivity makes procrastination simple. I can find almost any information I want immediately. I get caught up in link-hopping. I agonize over how to respond to a perfectly normal email or whether I should comment on a blog or post a status update on Facebook ... and then I think I don't have enough time to do everything that needs doing. My internet time needs some rules. I hope to come back with some.

In case you don't want to take a break from the internet while I do, here are some things to keep you busy:

Baptist pastor Michael Spencer talks over the new possibility of reunification between some Anglican churches and Catholics. That news brought tears to my eyes. "One of the most bold steps in reuniting the church any of us will ever see", Mr. Spencer calls it. I agree.

I love wordplay. I've also discussed a lot of theology in my time. If you don't mind a little light-hearted theological word-gaming, enjoy.

Are you in the mood for spooky things over Halloween? Best go check out The Hog's Head. They're watching scary movies this week. I say "they're" instead of "we're" because I don't watch scary movies, but I might pop up in the comments if I have time and ideas.

Tyler Stanton doesn't really have a million peeves yet, but he's working on it. Hilarious.

In plain English, my response to this idea reads as follows: Yes, please! (Hat tip to CMR.)

If you need a laugh and don't mind not-so-plain English, there's always Engrish.com.

Still bored? There's always David Bowie. I'm going to try not to picture that next time Lou puts on The Rise and Fall of Ziggy Stardust.
Posted by Jenna St.Hilaire at 12:00 AM