Ender's Game: From Novel to Movie

Yes, I'm still reading War and Peace, but I only have time for one post today, and I thought a review of the Ender's Game movie would be of more general interest. More W&P next week. 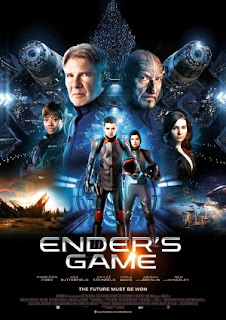 N.B: I'm reviewing this movie as a devout fan of the book it was adapted from. If you've never read the book, the review may make comparatively little sense and include mild spoilers. :)

The great challenge of adapting a much-known, much-loved book to the screen is not so much in translating details from the verbal medium to the visual; it's in finding the heart of the novel and making that the heart of the film as well. Failure seems more common than success.* The Narnia movies were mostly soulless because the scriptwriters missed the point of Aslan and therefore of the entire story. In the 2005 Pride and Prejudice, Keira Knightley caught Elizabeth Bennet's depressive side without catching her bright sense of humor, which resulted in a halfhearted portrayal. And nobody in the film industry seems to quite get the silent moral courage that powers Jane Eyre.

Ender's Game, Orson Scott Card's best-known and very-deservedly-loved novel, centers around the tension between brutality and compassion in the soul of one young human. This is worked out as Ender commands others while undergoing intense psychological suffering himself. It's an unusual and meaningful exploration of the necessity of loving your enemy, with contemplation of innocence and guilt and culpability, of the ethics of self-defense and of the means used toward that goal, of forgiveness and the righting of unrightable wrongs. Some of the questions are answered with a steady regard for truth and hope, and others are left for the reader to wrestle out with his own conscience. The whole of it is written with rare humanity and empathy.

Card was wise to hold onto the movie rights till he found someone who understood his novel and could share the vision. There are plenty of interesting, filmable details in the novel that screenwriter Gavin Hood could have focused on to the exclusion of more important points: tactics and strategy, Battle Room zero-gravity action, bullying scenes, everything that happens at Command School. Instead, Hood exercised unheard-of directorial self-control, abbreviating every one of the action scenes to make room for the core story, which he gave open recognition to with the quote at the beginning.

Not that the film lacked for action, mind. Ender gets his time in both mock combat and the real thing, and the Stilson and Bonzo fights, while shortened, are especially painful to watch. Even the dialogue is generally intense, and all that dramatic tension is reinforced by vids of Mazer Rackham's battle, the Giant's Drink mind game, Battle Room, and the simulator.

It was a delight to get visuals on the Battle Room and the space stations, and here I should say that the sets and photography were utterly beautiful. Scenes involving both Graff (Harrison Ford) and Ender (Asa Butterfield) were shot mostly in dark blue, which emphasized both characters' blue eyes and thereby subtly drew attention to the psychological nature of the story. Scenes with Valentine (Abigail Breslin) were warmer and browner, and while I'd always pictured Val and Ender as fair and Peter as dark (as per the book's descriptions, I believe), rather than the reverse, the color scheme was lovely.

I also loved seeing John Paul and Theresa Wiggin—though the shortening of John Paul to John, while probably accurate to the Wiggins' hiding of their respective Catholic and Mormon faiths, more or less removed the suggestion of religion entirely. Graff's in-book explanation of the Wiggins' quarrels over baptizing their children and of their conscience-stricken compliance with the global two-child policy is not plainly central to the story, so it wasn't an offensive removal, but it's a detail I always found fascinating, so I missed it.

Peter came off as a thug and not much else, but there simply wasn't time or place to give Peter and Valentine their subplots. What Hood kept, however, was Ender's internal conflict between the main characteristics he shares with each sibling: Peter's domineering brutality and Val's empathy and compassion. This was quietly emphasized through images as well as words.

Films rarely equal novels for nuance, and the story did lose some of its depth. The novel doesn't skimp on showing that Battle School is legitimized child abuse, but it communicates the I.F. leaders' belief that there's a clear motive for it in a way the movie doesn't. The movie shows the reactionary aggression of the humans against the Formics a little too unequivocally, too early. The end result is the same, of course, but in the movie, this amounted to making the ending seem a little more predictable and Graff a little less complex. Harrison Ford compensates well for the latter, though.

Moviegoers who have read the book will probably smile affectionately at mention of names like Alai, Bean, Fly, and Dink. Moviegoers who have not read the book will barely notice. These characters were mostly deemphasized—Bean included—for the sake of bringing Petra Arkanian forward, which invested the Battle School segment of the story with a little more female presence than it has in the book. Any study focused on war tactics and combat is naturally going to be male-heavy, so I wasn't bothered by that in the novel; on the other hand, I've always loved Petra as a character, and Hailee Steinfeld brought an impressive amount of light and energy to the role. Her appearance onscreen often eased the tension temporarily.

The ending was modified in a few ways to work better onscreen, and I generally thought these ways so clearly did work better for the medium that I wasn't disappointed. Getting an actual image of a Hive Queen, and a beautiful image at that, was a striking touch. I found that incredibly moving.

I'm just disappointed in two things about the movie: first, that they didn't pronounce Chamrajnagar for me, and second, that we didn't get to see Bean lean into his microphone at the end and whisper about Absalom. To be fair, that latter is from Ender's Shadow and might have given the game away, as it were, but whatever. Like any fan, I have my favorite details.

I'm beyond grateful, though, that the heart of the book was there.
Posted by Jenna St. Hilaire at 5:45 PM