Angel Voices Say to Thee and other stories

Wonder of wonders, miracle of miracles (now you can have that running through your head for a while): we had trick-or-treaters, plural, last night. Five knocks at the door. I was delighted. 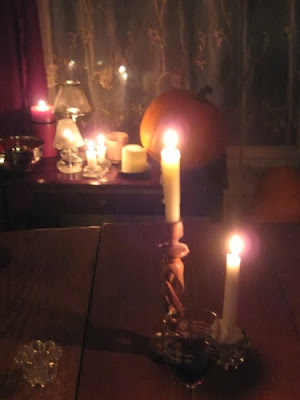 Lou and I lit the candles and turned on the Phantom of the Opera soundtrack (if you prefer, you could have that running through your head), and between door-answerings we both worked. As it turns out, it's next to impossible to write pensive little fairy tale retellings with Gerard Butler (sorry, Alison and Travis; I like Emmy Rossum!) growling in your ear. Lou seemed to manage his reference-sorting without undue influence from the angel of music, but I didn't get anything done until Butler roared, "It's over, now, the music of the night!"

Oh, and I'm done with the parenthetical phrases. I promise.

Masha didn't post her meme this week, so I'm going free-form. I'd forgotten what this feels like. But I believe cat pictures are still required.


I don't dare post pictures of the garden. It wants winterizing, and looks terrible.

Music of the week: Jadrian Coppieters. For all my tortured relationship with modern art in all its forms, I'm always hoping to understand it. Therefore, one of the reasons I've been listening to this young composer all week is that while his forays into atonality go beyond my comprehension, he mostly keeps the door open for me. He's got quite a gift for evocative melodies, and that helps me find my way along the more dissonant passages.

The second reason is that several of his pieces are based on classic texts—Kerouac, Faulkner, Dickens. I am now reminded of my obligation as a literary American to read the first two authors, but it's his setting of the Dickens poem "Things That Never Die" that I'm embedding; the poem is Dickens at his most universal, juxtaposing bright, innocent hope with very real pain, and the setting is absolutely beautiful. The two together put tears in my eyes.

The soprano is Andrea Paulson; the pianist, Kelsey Barnes. Enjoy.

Now I'm in the mood for Dickens. I downloaded A Tale of Two Cities—it's shorter than David Copperfield, which I've long wanted to re-read—but first I'm bound to finish War and Peace.

What I was thinking, picking up a novel that's over a thousand pages long right now... well. There are reasons I call myself an optimist. I've planned too many big projects for "by the end of the year": finish revising two novels, perform in November concert, attend all the extra choir rehearsals leading up to Christmas, make Christmas gifts for all the local family including seven children, record another song and subsequently make my little lullaby CD available online*... yeah. I might be comparatively scarce around the interwebs in the next two months.

Happy weekend! Make sure you set your clocks back and get your extra hour of sleep. Or whatever. Maybe this'll be the year that I defy books and the blogroll and go to bed in time to sleep that extra hour, but that would be a first.

* Christie has me convinced to do it, and I think I'm bold enough to follow through. The entire project was recorded on a dying mixer in the course of two weeks from planning to completion, and I’m such an amateur, and I have a long-standing horror of someone trying to blast it over a proper auditorium-sized sound system.... but the small fry don't care about such things, and I did mainly make it for them. :)
Posted by Jenna St. Hilaire at 3:11 PM