Despise Not the Tradition and other stories

I kicked off my detox yesterday by making apple butter, which is full of sugar; by having us finish off leftover meat dishes; and by getting angry at strangers on the internet. I suck. But at least I drank all my teas and drops...

It has been an annoying week for Christianity in the news. There was really nothing revolutionary in Pope Francis' widely publicized and equally widely misinterpreted comments from the interview following World Youth Day. (Jimmy Akin has done the basic explaining for me.) This was objectively a much bigger story:

Also, I should stop reading posts by evangelicals about why the evangelical church is a failure. They grate on me. And then the follow-up posts, also written by evangelicals, grate on me, too—by making less-than-charitable assumptions about why young evangelicals might be drawn to the Catholic and Orthodox and high-church Anglican traditions.* [UPDATE: Jay McCumber defends his comments. While the reasons he gives for evangelicals defecting to high church traditions were not my reasons, he says he has heard them given by friends of his. They were not assumptions. I stand corrected.]

But I'm with Jay McCumber in being concerned about the disaffected-evangelical meme. While I don't dare accuse anyone in particular of this, not even Rachel Held Evans, I can say that it is highly dangerous to despise a tradition that raised you in love.

Disagreement may be fair, but despising involves pride. As an evangelical-turned-Catholic, I know the temptation; I deal with it every time one of my evangelical friends verbal-backhands my Church (often without quite realizing they're doing it) in terms that prove their understanding of Catholicism is made of smoke and mirrors.** (The current cultural tendency to despise everyone who isn't as enlightened as you are—hear my sarcasm there—is absurdly egoistic. And yeah, turns out I'm prone.) It can teach you resentment, even against goodness. It can twist your personality. It can definitely make you a fool. And it almost invariably leads you to teach others to despise your people and your childhood tradition, too.

This is why I have never written my conversion story.

The evangelical church has its flaws. Some of them are grave. But it leads a lot of people to take God and sin and the need for salvation seriously. It leads a lot of people to work hard to create stable families, to provide a privileged upbringing that too many church children feel guilty over instead of grateful for. It leads imperfect people to love more fully and faithfully than they would otherwise. And it rightly teaches that real love and faith mean learning obedience and humility as well as affection and acceptance.

It bothers me that anyone thinks the solution to imperfections in church is for the elder generations to pay more attention to and serve the younger. The older folk have done their time on that count; they raised us.

Bah. I've said my say. Now I'm going to go back to being an optimist.

All right! If you made it through all of that, you deserve a cat picture. 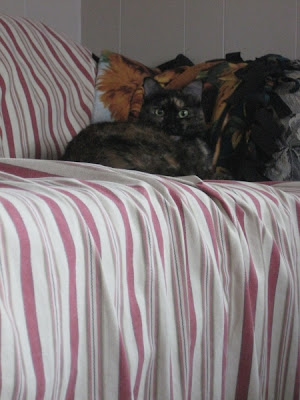 This is why I had to make apple butter: 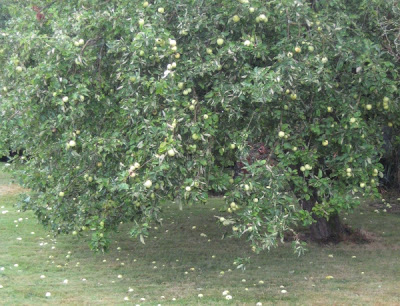 We're picking the tree tomorrow, but if I want to save the windfalls, something has to be done right away. It already looks like time for another potful.

It has also been raining. The weather report said "showers"; if I had known it was going to rain this much, I would have covered my tomatoes.

But the strawberries are happy. 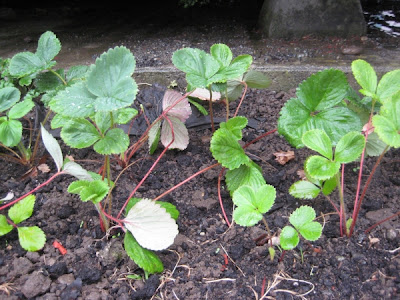 Music of the week: King of Instruments feature! This time it's the Boléro de Concert in G minor, Op.166 by Louis James Alfred Lefébure-Wély. The organist is Philippe Delacour.

I'm off to clean house and make fish tacos. Masha, do fish tacos count as detox food? I think I'm thinking like a Catholic instead of a vegetarian. ;)

* Actual reasons young evangelicals might suddenly turn Roman Catholic (or Orthodox, or in some cases, even Anglican or Lutheran) include: "For the fullness of Christ in the Eucharist." "For the communion of saints throughout the ages." "Because the Church's historical claim to authority makes sense to us." "We looked up the ideas in the Bible and HOLY CATS they jived!" Etc.
** They freely accept the name Protestant, but what post-Boettner evangelicals as a group think they are protesting largely does not exist. There are differences between Catholic doctrine and that of the non-denominational churches, but not necessarily the differences that are perceived; the vision of a Mary-worshiping, saved-by-works-instead-of-by-grace-alone, Dark Ages persecution cult resembles the reality about as closely as Dan Brown's fiction does. It's almost invariably an innocent, good-faith mistake, however. It's even an understandable one (heck, I believed the misrepresentations myself for twenty-odd years). It would be great, though, if its innocence prevented it from being damaging.
Posted by Jenna St. Hilaire at 4:03 PM