Once Upon a Midnight Dreary: Darkness in Fantasy Fiction

In blogalectic with Masha and Mr. Pond.

When you go to bed, don't leave bread or milk
on the table: it attracts the dead."
~Rainer Maria Rilke 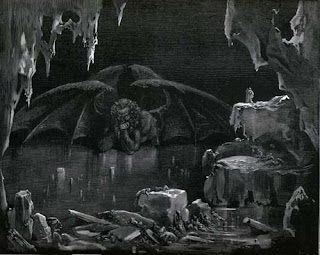 "I've heard again and again on the radio, in conversations over coffee after Liturgy, and at parties [that] the problem with myth and magic in fiction is the darkness, the spirits, and the sense of evil lurking that they feel in the background.... We've touched a bit on darkness before, is there a line that shouldn't be crossed? When does myth and magic become occult? When do fairies become demons?" ~Masha

Near the end of the Inferno, Dante and Virgil reach the tenth circle of hell at last, after witnessing the doom of Greek and Roman mythical characters, Florentine politicians, and popes who put self before God and avarice before the duties of the Church. There at the bottom of the pit, trapped in ice created by the constant fanning of his wings, Satan chews up Judas, Cassius and Brutus—betrayers locked in torment with the greatest betrayer of all. Virgil leads Dante on a careful climb around the fallen Lucifer, and they come out of the pit to the land before Purgatory, where at last they can see the stars.

Darkness and relics of old paganisms have long held their place in Christian supernatural literature; medievals like Dante had no fear of either. Today, we shudder at the pictures of the damned; Dante painted them vivid and garish. Today, we challenge pagan references surrounding Christmas and Easter; Dante drew images of classical myths on the terraces of Mount Purgatory.

Today, we argue over both what constitutes darkness and whether it belongs in our fiction. The conflict often centers upon fantasy, though not always—a Wall Street Journal piece about the darker side of teenage life in young adult novels started an enormous flame war in the blogosphere last year. Frankly, I find dementors and vampires far less troubling or frightening to read about than self-harming and suicidal and bullying teens; there's one step of removal between me and a dementor, and that is fictitiousness. But the question before us now primarily regards the fantasy.

Says Masha, in defense of the presence of darkness:


I don't know that I've ever found a story so dark that I didn't see the flickering light, a well-written book will always give a glimpse of redemption, because it is the nature of man to reach for the light. Even the ugly and terrifying will give way into beauty, given a chance by writer and reader.

Says Mr. Pond, in defense of compassion for the darkened ones:


The answer, as everyone knows what read a proper story, is that fairies become devilish when they’re angry, or threatened, or lonely, or afraid. Anyone can live comfortably with the Good Neighbours nearby, if you mind your own business and don’t go digging where you’re not invited. Or if invited, take nothing away with you unless bidden, bring nothing with you that isn’t asked, do not tell what you saw unless you are told to speak. In other words, be polite.

For those of us who would understand life or literature, we must look honestly and justly upon dark things. Dracula, for instance, scuttling down the outer walls of his castle like a lizard in a black coat. The beldam's disembodied hand chasing Coraline back through the trap door. Janner Wingfeather's coffin in the Fork! Factory! Gollum whispering to the magic ring in the caves, forever destroying the word precioussss. The gentleman with the thistle-down hair slick-talking Stephen into endless nighttime ballroom dancing.

Who will say where myth becomes occult, magic evil or fairies demonic? Was it evil when Bacchus and the Maenads turned up in Narnia, or when Ransom accepted the aid of Merlin? When Aragorn called forth an army of the dead? When Egwene put on her ouroboros ring? When Puck cast his love-spells on Demetrius and Lysander? When Hagrid broke down the door of the hut, gave Dudley a pig's tail, and said "Harry, yer a wizard"?

Was it evil when I swiped a minor Greek myth and a lot of astrological symbolism to tell a story that never mentions Christ or any God, but which—if I did my job right, and if you know what you're looking for—should give you not a justification for basing decisions on the newspaper's horoscope section, but various glimpses of the central truths and themes of Christianity?

I suggest that myth and magic and faerie become occult or anti-Christian when authors use them as occult propaganda, or for anti-religious or anti-God agendas. Which they are free of course to do—but this is not the default position of Western fantasists, and most Western fantasists would have to work a lot harder than they do to escape utilizing basic Christian concepts in a story that pits evil against good, darkness against light. Good fantasy is hard enough to write without attempting to subvert its very nature.

By that nature, darkness in English mythic fiction symbolizes a host of less-than-tangible realities. It reminds us that our struggle is not against flesh and blood but against mental and spiritual evils, including the darkness of our own natures.

The heroes and heroines of fantasy counter darkness with courage: so Harry battles Voldemort in the graveyard, wands locked in fierce contest, the shades of Voldemort's most recent murders climbing from the point of the yew wand to comfort and strengthen Harry.

They counter darkness with love: so vampire Edward clings to his conscience, to every remaining scrap of his humanity, refusing either to kill or to use the girl whose body and blood tempt him more than any other.

They counter darkness with humor: so Sophie Hatter bosses around the fire-demon, Calcifer, making something more human of both him and Wizard Howl.

I have never liked darkness, nor been comfortable with it. Yet I value it, in its place and fairly done. As a Christian or as a lover of light or both, I cannot write some things as good nor praise them if portrayed so in the work of others, but such temptations are extremely rare. Each author and each reader must decide what they can accept, what their consciences and their beliefs allow them to write of or to appreciate.

But we artists must be allowed to paint dark, else we cannot fully show the light.

* Rilke quotes are courtesy of Masha's post. Masha, sorry I didn't get them all in. :)
Posted by Jenna St. Hilaire at 9:30 AM