Right, so when I listed some of my favorite things the other day, and a bunch of things from Italy wound up in there, I realized that I still haven't posted much about the trip. Hopefully I can make up for that in the next few weeks.

My mother is an artist, and I heard a lot of artist names around the house growing up. To my surprise, I still felt quite ignorant in Italy; there have just been so many great artists through the centuries. But I do have favorites.

Everyone loves Michelangelo--it would be hard not to. He's all over St. Peter's, of course, and when you walk in the great doors and look to the right, this is what you see. It brought tears to my eyes. 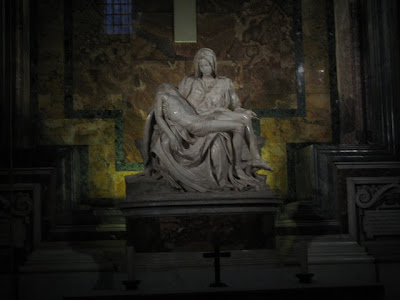 This statue of Moses was in the St. Peter in Chains church. I kind of wish I'd stolen the camera from Lou and gotten pictures of Leah and Rachel, too--they were on either side of Moses. 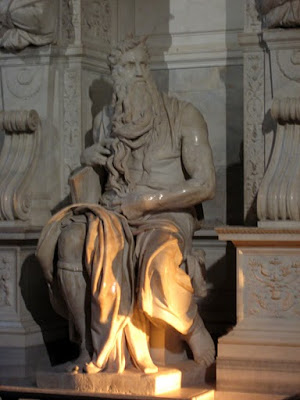 Bernini turned up everywhere too. His statue of the four great rivers fascinated me. Here's the Nile, head covered because in Bernini's time, the source of the Nile had not been found: 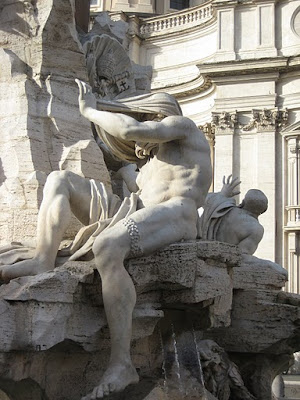 This statue of St. Teresa of Avila in ecstasy was at Santa Maria della Vittoria, one of the more beautiful small churches we saw. I could have stayed in there for a long time just staring at the ceilings (which, unfortunately, did not photograph well.) 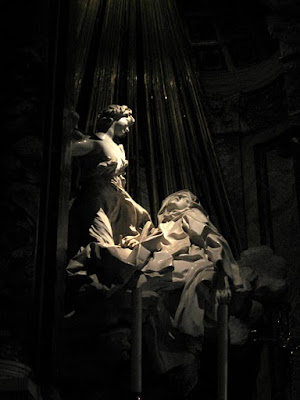 I'm sure Mom told me about Caravaggio at some point in my life, so I don't know how he came as such a surprise to me. His use of light and shadow had me in awe. 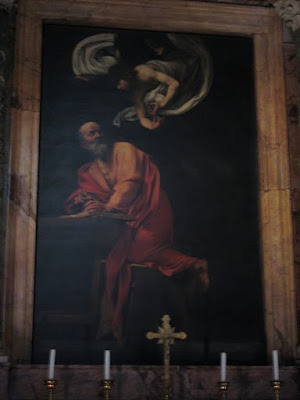 I don't remember the official title of that piece, but I believe St. Matthew is writing his gospel there. 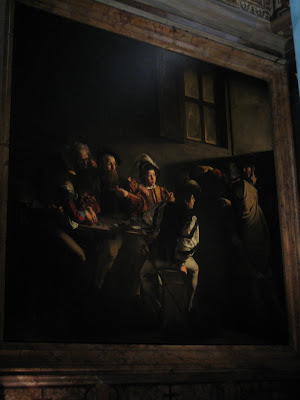 The above is the Calling of St. Matthew. If you click on it, you'll get a larger image ... unfortunately, without the use of flash, all pictures taken inside churches pretty much turned out dark.

Last but not least, Raphael. I love Raphael. The School of Athens: 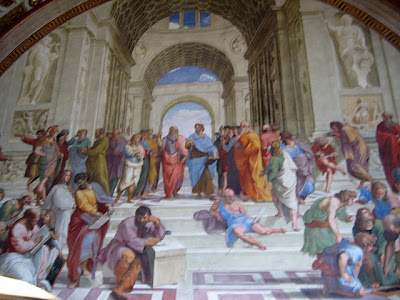 ... and The Dispute over the Most Holy Sacrament (both of these in the Vatican Museum): 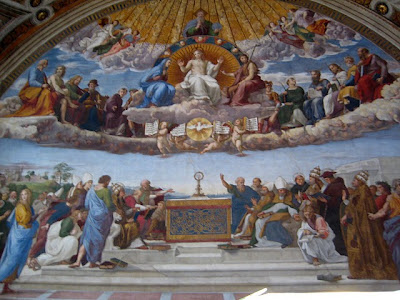 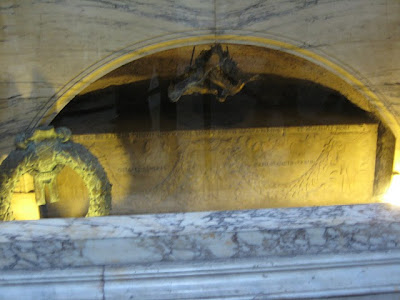 The inscription reads "ILLE HIC EST RAPHAEL TIMUIT QUO SOSPITE VINCI RERUM MAGNA PARENS ET MORIENTE MORI"--translated, according to the sign beside it, "Here lies Raphael, by whom Nature herself feared to be outdone while he lived, and when he died, feared that she herself would die." I know I'm a bit of a sap, but it made me cry.
Posted by Jenna St.Hilaire at 12:22 PM