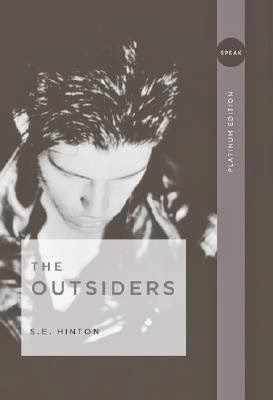 “I’m okay.” I tried to think of something to say. I’m usually pretty quiet around people, even the gang. I changed the subject. “I didn’t know you were out of the cooler yet, Dally.”

“Good behavior. Got off early.” Dallas lit a cigarette and handed it to Johnny. Everyone sat down to have a smoke and relax. A smoke always lessens the tension. I had quit trembling and my color was back. The cigarette was calming me down. Two-Bit cocked an eyebrow. “Nice-lookin’ bruise you got there, kid.”

I touched my cheek gingerly. “Really?”

Tough and tuff are two different words. Tough is the same as rough; tuff means cool, sharp—like a tuff-looking Mustang or a tuff record. In our neighborhood both are compliments.

There are two kinds of people in the world, as far as fourteen-year-old Ponyboy Curtis can tell, and he and his gang belong to the underdogs—the greasers, the outsiders. The greasers are used to watching their backs and sometimes getting jumped by the rich kids, the Socs, until the night someone gets killed. Then they discover how deep their loyalty goes and who they cannot afford to lose.

S.E. Hinton, writing in the voice she knew and drawing from her own experiences, brought the world of teen classism and bullying to the attention of a wide audience. At least as impressively, considering her age—sixteen at the time of the writing—she brought it to life. Her narrator, Ponyboy, observes his world quietly, even innocently, accepting his often horrifying life situation with childhood resilience and reporting on it with a surprising perceptiveness.

His greatest success is in conveying the humanity of his gang to the reader. The story left me with tears, a lot of memories, and a half-dozen new friends.

Advisory: The violence and tragedy are onscreen. The voice, however, is childlike enough to make it readable for its typically middle-grade audience.
Posted by Jenna St. Hilaire at 5:14 PM