A Soft and Golden Light and other stories

This week, the primary problem is that Lou is in Rome. His absence leaves me with no motivation whatsoever to stick to any kind of routine. I have spent all week trying to write and failing, staying up way past bedtime, not bothering to put sheets on the bed, eating at the oddest hours possible, and otherwise batching it like a college boy. But hopefully that will get better, and I will try and return to something resembling a decent posting schedule next week.

But this week has also been amazing, so hang on for verbal and visual snapshots therefrom. Working backward:

I think I inherited my mom's tendency to mess with her hair when she gets emotional. This morning, under the influence of the past week, I picked up a pair of scissors on my way to take a shower. The result:


I kind of love it so far. The only problem is that watching a Carly Rae Jepsen mashup was part of what gave me the idea. If I keep getting "Call Me, Maybe" stuck in my head every time I look at myself, the bangs might not last.

When I began seriously considering college, I started clicking through U.S. News' enormous list of best online bachelor's degree programs. One of the top fifty absolutely floored me with its tuition rates, so I clicked over to the school and started researching. I read through the description of their Liberal Arts B.A. program—and I couldn't have more perfectly described what I want out of a college education. It emphasizes four areas of study:
...and, to cap off the awesomeness, it requires two years of a foreign language. Spanish!!!

That right there decided me on both going back to school and applying to that university as one of my top choices.

Yesterday afternoon, I decided to check the status of my application and see if they'd gotten my GED transcript. This is what I found: 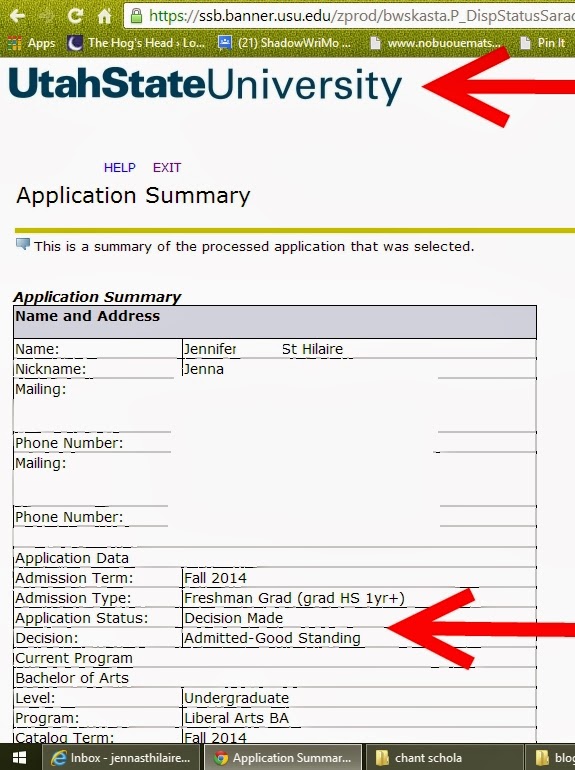 More later, after I get the letter that tells me what I have to do to say Yes, and start talking to program advisers, and... oh my gosh, everybody. I am SO EXCITED!!!

Very late Monday night, seated at the keyboard and overwhelmed emotionally, I improvised my way through setting a blank verse poem of mine to music. I played with it a line at a time till it sounded right, sometimes focusing in on a candlelight piano sound, sometimes letting myself drift off the tonal center.

I didn't write it down, but it comforted me. We tend to think of art in terms of permanence, of works that survive and transcend time. But sometimes you just need to make the beautiful thing once.

Late Monday night, Masha sat in her car in the snow, Christie sat in her apartment with her little boy, and I sat on my couch, and the three of us talked on Google video hangout for three and a half hours. Besties! I love you two girls.

I spent Monday itself at my sister's, trying vegan blueberry muffins, letting my nieces disembowel my purse and eat all my Tic Tacs, and not moving any more than necessary for a good hour as the three-year-old slept snuggled on my lap. My sister kept asking if I wanted to move the niece to the couch, but Aunty was too charmed by the small one's loving confidence. I get wrapped around little fingers so easily.

Lou kissed me goodbye in the dark Monday morning, long before sunrise. Not since we got married have we been separated for a week, and until now I've not had more than two consecutive nights at home without him. I wasn't sure how I'd handle it. His daily emails keep me sane.

My camera and I have been studying and experimenting these last few days. Mostly I've been working on still targets, because Maia moves around too much for beginner focus practice—but of all the blurry pictures I've gotten of her, I did sort of like the light in this one: 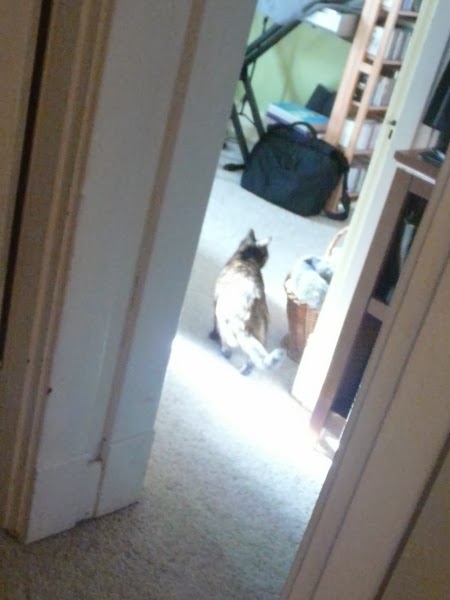 The men of the chant schola I directed got me flowers and a card, which they presented after the last Mass we did together. We were an exhausted bunch at that point, but a victorious one. We'd done the improbable: we'd sung the chant propers at a Sunday Novus Ordo Mass.

We also did polyphony (well, a canon) and sang four beautiful hymns in harmony; we sang from the choir loft and had the old pipe organ played and flute and recorders with it—and, quite frankly, we rocked. All thirteen of us (ten singers, two musicians, and me... don't tell Professor Trelawney), if I may say so myself.

Lou and I came home from a successful first Mass to our first-ever houseguests—one of Lou's college buddies and his incredibly sweet-natured wife—who enthused about hearing the old chants. Then Lou and his friend set about getting limes into bottles of Corona, and my new friend and I made fajitas and proper California guacamole, and the four of us sat down to the kind of dinner and conversation shared by friends who are close in age, in ideals, and in life situation. I was aglow straight through it.

As houseguests, we couldn't have had better. They put up very patiently with sleeping on the air mattress and never glimpsing the cat.

The light up in the choir loft comes through the stained glass soft and golden, reflects off tall organ pipes, and crowns its genius by flattering everyone. I always think my friends are beautiful, but a good warm light emphasizes the hallowed in all beauty. Whoever designed our church building understood that. (Whoever painted the inside bright white and put acoustic tiling on the ceiling, not so much. But the old choir loft is still a gentle place to stand.)

There were no microphones carrying the ten deep voices out of the loft and down into the nave. The resonant acoustic of the building did the work, balancing the schola against the force of the organ, floating the flute and recorders on top.

Traditionalists may hate me, but we did Fontgombault one better and put not just organ underneath the chant but a flute drone above. As far as I'm concerned, it was heaven meeting earth.

On rare occasions, a passing reference in a casual conversation can change the way you see the world. One conversation with two of my friends last weekend has been teaching me, ever since, about what it means for a Catholic, for a follower of Christ, to love.