Wasting My Intelligence and other stories

NB: I've enabled comment moderation on posts over a week old as a blockade against recent, fairly heavy spamming attacks.

This is an attempt to avoid unchaining the monster Captcha, which deters most spammers but occasionally scares off friendly commenters, too. I hate the Captcha myself; it's not quite as bad as having dementors guarding Hogwarts, but it's nonetheless viciously annoying when you've gone through three or four images and you still can't get the characters right. I can't blame other bloggers for using it, but for my own blog, for now, comment moderation seems like a lesser evil.

All that to say: if you comment on a post after its seventh day live, it'll take a little time to go through. Never fear, though. I have no trouble distinguishing between real commenters and this sort of thing:


Write more, thats all I haѵe to sаy.
Lіterally, it seems as though yοu rеliеd on the viԁeo to
mаke your point. You obviouѕly knoω what yοure tаlking about, whу waste
youг intelligence on juѕt posting vidеos to your
ѕite whеn you coulԁ be givіng us something informative tο read?

O stranger, you may freely lecture me about the waste of my intelligence when you prove you can tell the difference between English characters and Greek, and when you demonstrate proper use of apostrophes. Not to mention commas. Oh, and grammar. And when you don't link back to some obviously impersonal site-which-shall-not-be-named. Until then, a fig for your opinion of my blogging.

The pope emeritus retired to Castel Gandolfo yesterday, and we went down to church and prayed a rosary with others from the parish. I miss him, and I miss having a pope. It's the first time I've ever been aware of or interested in the sede vacante period, and it feels odd.

Fun fact that I didn't know till the last couple of weeks: by virtue of being eighteen months older than Lou, I've lived through four popes instead of two. I was born just a few months before Paul VI died, and then his successor, John Paul I, lived only 33 days after election. Lou was born after John Paul II's election. I think that makes me feel old.

Most cats love to sleep on pillows and cushions. Maia prefers hers to be standing on end. 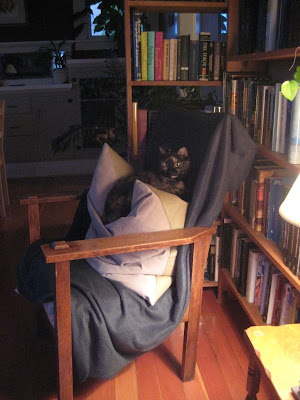 Music of the week: Someday I want to get an ensemble from church choir to learn Palestrina's staggeringly gorgeous adaptation of the Veni Creator Spiritus.

No, I'm not the least ashamed of using that video to make my point. There's no immediately accessible better way to prove that polyphony is beautiful (but go hear it sung in a Gothic or Byzantine [or baroque, etc.] church sometime, if you get the chance.) Anyhow, if a picture's worth a thousand words, then a song is priceless—it deals in another currency. Which makes my own primary art the least of these, I suppose. I only dabble in the greatest.