Routine Disorder and other stories

No, if you're wondering, I have not given up on Top Ten Tuesdays, despite my three-weeks-running failure to participate. The last two weeks have just not played nice with my usual routine. It's been difficult to keep track of what day it is, let alone of what things have to be done on the given days. Being sick all this week has not helped. And none of the last few Top Ten questions have been easy enough to dash off in half an hour.

Theoretically, next week should be sane.

You wouldn't think it would be hard to grow zucchini, but out of ten seeds planted, thus far one has come up:

But the roses have started blooming! 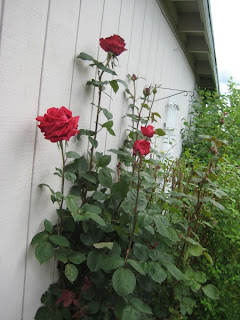 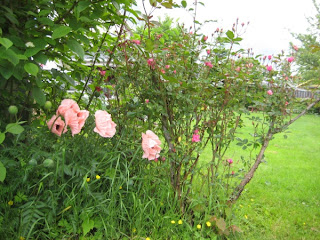 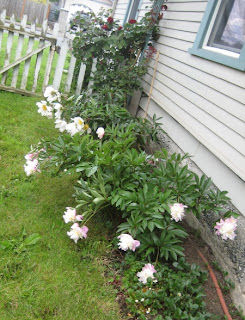 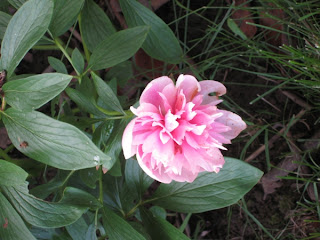 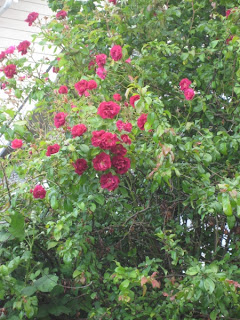 It's rained all week, which... at least it was the week I was sick. Here's hoping for a sunny weekend.

Gratuitous cat picture, snapped over the top of my computer just now:

Writers' link of the week: As someone who has no problem whatsoever spending twelve hours a day at the computer, here's Jennifer Hubbard on The Walking Writer. Honestly, the general idea behind this piece is one of the reasons I have a garden. Anything to—well, honestly, to get my butt out of the chair occasionally.

Music and random amusement of the week: OK, this is not actually music. But I've been thoroughly enjoying the Lizzie Bennet Diaries on YouTube. It's a modern-day retelling of Pride and Prejudice, done entirely in vlogs, and the acting and scripting are really well done. Best of all, it's four-minute videos uploaded twice a week, which means that even a snob like me who never has time for television can make time to watch it. And I have, oh yes.

No guarantees that the attitudes toward marriage will be of Austen's caliber. Or anything like. That disclaimer aside—this is just too much fun to not link.

Full (though not yet complete; the series is far from finished) playlist here.

Of course, if you really want some music, there's always Mozart's Voi che sapete from La nozze di Figaro, which melody you may remember Lizzy singing in the Colin Firth/Jennifer Ehle version of Pride and Prejudice (otherwise known as The Best Adaptation Ever).

If you're like me, and you were prevented from seeing the Venus transit by heavy cloud cover—sheesh, it's hard being a stargazer in the Pacific Northwest—here's a lovely NASA video of it.

And now, happy weekend! To all of you.
Posted by Jenna St. Hilaire at 8:22 PM

Email ThisBlogThis!Share to TwitterShare to FacebookShare to Pinterest
Labels: ...and other stories, Jane Austen