The Resident Destroyer and other stories

Maia's exploit of the week: a two-AM adventure of unknown origin, which resulted in her knocking over a heavy crystal vase that I'd tucked tightly into a corner on purpose to keep her from crawling behind it. Said vase fell off the built-in cabinets, broke a couple of leaves off the palm tree, and put a dent in the wood floor.

Miraculously enough, the vase survived intact. Also miraculously—and probably fortunately for Maia—I slept right through the whole commotion, including Lou getting up to rescue the vase and scold the culprit.

Remember when the decorations on our built-in cabinets looked like this?: 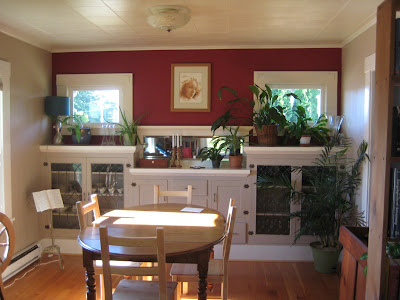 Maia, all by herself, has reduced them to this:

The vase is now atop the refrigerator. The worst she can do there is knock it over. And here's your picture of the resident destroyer herself, on another shelf from which she's mostly eliminated decorations:

Running errands yesterday, I chanced upon a few crates of roses marked Clearance. I came home with two for a total of $9, and both of them are now adorning the front of the house. 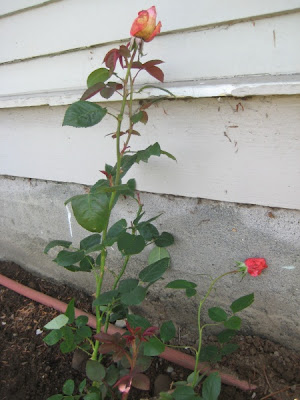 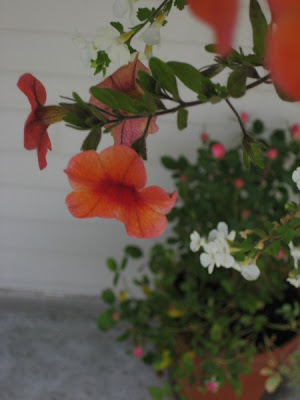 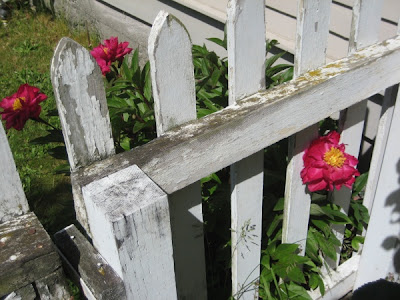 And these... blue things. I have a hard time resisting strongly blue flowers.

This Egyptian walking onion is rather stately. 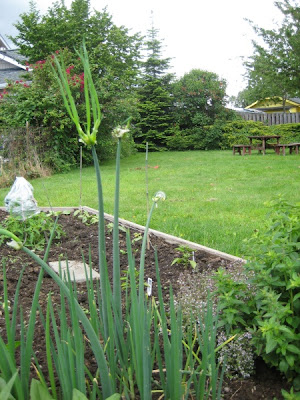 Awkward moment of the week: when the department store doesn't have the fragrance mist you bought last time, so you spray a little bit of just about everything else they have on various fingers and parts of your arm—and then, as the scent combination gets overwhelming, you realize that you've still got half an hour of shopping in a crowded store, and you're afraid to get within ten feet of anyone.

Writers' link of the week: Every blogger who likes writing, or stories, or Pixar, has linked Pixar storyboard artist Emma Coats' twenty-two tweets on storytelling (aggregated here by io9) in the last few days. It's my turn. I'm tempted to print this out and hang it on the wall beside the couch, where I do most of my writing.

Music of the week: Bach, with some excellent solo work by German bass-baritone Thomas Quasthoff.

Random amusement of the week: Leah Petersen, posting at Bryan Thomas Schmidt's site, gives us some personality analysis based on which punctuation mark we tend to overuse. I probably identify most strongly with Comma—though I probably underuse commas—and Question Mark, though how one overuses the latter I couldn't say; it seems to me that a sentence is either interrogative, or not.

What I actually tend to overuse are em dashes. Make of that what you will.

And now, as I've got just four hours to have lunch, clean the house, practice the piano, and get some writing work in, I'd better be off. Happy weekend!
Posted by Jenna St. Hilaire at 1:19 PM