Learning the Stars and other stories

Though apparently Anchorage got 75-degree days before we did, Bellingham has finally decided to give the clouds a week off and we've had sunny days in the high 80s. This is what I've been waiting for—I love it. Sweet summer! How I long to keep it for the next three months. 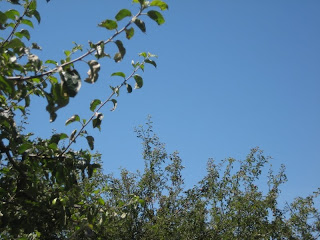 One of Lou's cousins is getting married this weekend, so we're leaving for the east side of the mountains in a few hours. I still haven't decided whether or not to take my laptop or just a chunk of my manuscript and a notebook. Either way, I need to write.

I need to learn to write when other things are on my to-do list. Most of the time I try to get everything else out of the way first, which never works—if I do succeed in clearing the day's list, I'm too tired to focus, or I get good and warmed up to the story at about 10:00 PM when I should be winding down. Next week's goals include getting some serious writing time in early in the day.

One of my favorite things about summer weather: I can stargaze without having to guess around clouds to trace constellations. This week I've located Aquila and its alpha star, Altair; Cygnus and alpha star Deneb; most of Scorpius including alpha star Antares; part of the constellation Libra, and the star Polaris. I had trouble with Polaris until I learned that a line drawn through Merak and Dubhe of the Big Dipper points straight at it.

Venus has also been shockingly, beautifully bright above the western horizon at sundown. The first time I saw it, I thought it was an airplane and couldn't believe my eyes when it did not move.

I've also learned this week that the zodiac is the ring of constellations along the ecliptic (the path of the sun.) This might be an appalling display of ignorance, but I never knew the term had a scientific meaning. Interesting.

Learning the stars' often strange and difficult names makes me think of this:

"If you've been assigned to me, I suppose you must be some kind of a Namer, too, even if a primitive one."

"A Namer. For instance, the last time I was with a Teacher—or at school, as you call it—my assignment was to memorize the names of the stars."

"You mean all the stars, in all the galaxies?"

"Yes. If he calls for one of them, someone has to know which one he means. Anyhow, they like it;  there aren't many who know them all by name, and if your name isn't known, then it's a very lonely feeling."

That's one of my absolute favorite moments in fiction, especially in context with the rest of the book. A Wind in the Door is well worth reading and re-reading.

Lou and I watched the first several episodes of Season 3 of The Office on Monday night. I am still laughing at Jim sending Dwight faxes from Future Dwight, Andy calling Jim "Big Tuna," and Michael's response to a black-lit hotel room.

But then, I'm also still laughing at Dwight's complaints against Jim from an episode in Season 2. That reminds me of several pranksters I've known—and of the time when some other girls and I put all the youth leader's shoelaces in Zip-loc bags of water and froze them, and lay all fourteen of his boxes of Blueberry Morning breakfast cereal (no, I'm not exaggerating) under the sheets in his bed... haha, those were the days. :)

Twilight fans, I loved this post—recommended to me by fellow Blogengamot member Arabella Figg—about the power of Eclipse and the Saga in general. I think he's on to something.

Unfortunately, if anyone responded sensibly to his question at the end, it got lost in the hundreds of comments by trolls. But here are my two cents: I don't think it is possible to be pro-woman without understanding that what almost every woman wants is to be loved by someone who is stronger than themselves in some quantifiable way, and to propagate the species. Bella's story speaks to those primal desires. Of course it draws the crowds.

Funny line of the week, thanks to Tyler Stanton: "To whom it may concern: Please start a blog that consists entirely of pictures of people about to sneeze. This is the funniest face a human can make."

With that strange mental picture—Happy weekend, everybody!
Posted by Jenna St.Hilaire at 3:05 PM

Email ThisBlogThis!Share to TwitterShare to FacebookShare to Pinterest
Labels: ...and other stories, stargazing, Twilight, writing