By way of Christie (I know there weren't many rules, friend, but I think I broke all of them! Oops! XD): 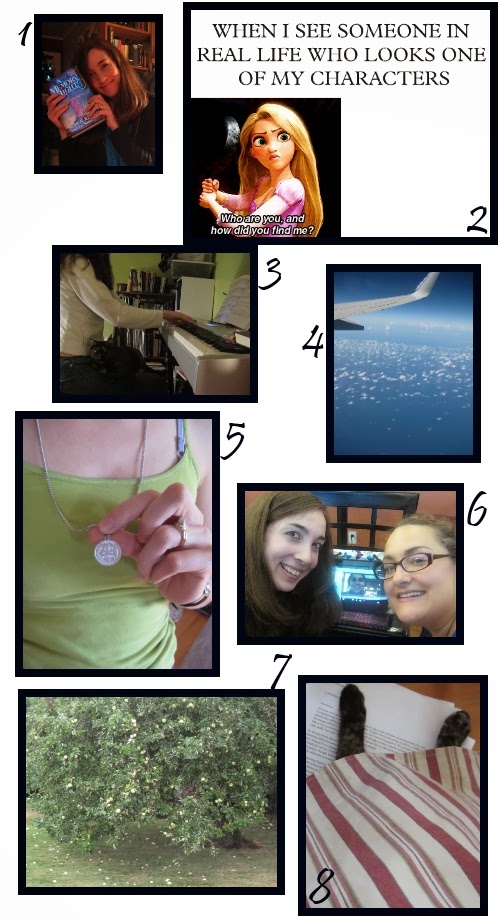 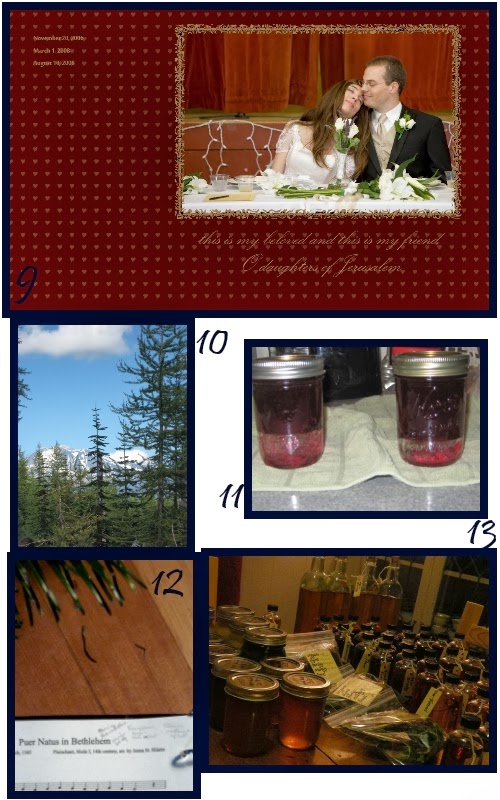 Technically, I'm not supposed to use words, but I don't work that way. ;)

Number 11 is more important than it might look; it's a tiny representation of the mental event that shaped 2013 more than anything else to me. This was the year I overdid, over-thought, and overreacted to everything.

Originally—I think—this was due to a reaction to a (doctor-prescribed) vitamin supplement. The mood shift happened on January 2, just weeks after I started taking methylated folic acid (not methamphetamine; I'm not that much of a Bellinghamster :P), and I didn't come down till mid-March, when I ran out of it. Even then, I only came down part way, and it's pulsed back up by day or week or month ever since.

I'll spare you the details, except to say that it involves things like racking up a huge sleep debt without seeming to need to repay it, alternating between various degrees of nervousness without respite, and stirring from a dark reverie in the middle of the kitchen in the middle of the day and feeling the way you feel when you wake at three o'clock in the morning from the kind of tragic dream that haunts you for weeks. Your emotions wind up getting stretched like a set of guitar strings tuned to the highest possible pitch and then strummed with a hard pick.

This puts a threat on 2014: according to Newton's third law of motion and my own past experience, elevated mental and emotional states are followed by equivalent mental and emotional crashes. That's not something I can afford. Therefore, my first goal for 2014 is to allot my mind and feelings some rest.

Crazy phase aside, it was a quiet and happy and likable year overall. We were mostly spared serious trouble, thanks be to God; up until just before Christmas, things went easily enough. Other year-shaping events of 2013 included:

The days surrounding Christmas included Katie's wedding, wherein I unexpectedly wound up directing the prelude choir and Lou braved the dance floor with me once just because he knows I love it. There were four days of more natural beauty than I've seen since a Crescent City sunset ten years ago: thick frost on tree branches poking up into white fog, puffs of mist drifting over slate-gray river waters.* I've had time with all of our nieces and nephews, whose ages range from the days-old baby niece, who slept for hours in my arms, to our college-junior nephew, who roomed with us at Katie's wedding and talked football and music with me.

It's been fun, but there's been so much going on that I've had to resort to hiding out in the bathroom and staying up into the wee hours to get introvert time. And that same stretch of time included the praying of two painful novenas simultaneously: St. Peregrine for someone with cancer and Divine Mercy over a suicide.

I've spent time crying over Nick's death, letting things slide out of sheer exhaustion, falling asleep at family gatherings, not caring about anything this Christmas season wanted of me, and yet—always at the last minute—I've been given the strength for what matters, one day after the next.

I barely knew you, Nick; the one evening we spent together, we were both too shy to say much to each other. But I remember you making me laugh, the last time I saw you. I know you were a bit of a loner, and I know there were reasons I don't know much about that kept you angry—but you were loved. I hope all is forgiven. I hope you're feeling divine mercy like a faithful father's love, and like a friend's.

The new year came without me being ready, and I'm comparatively goal-less. Mostly, I want to focus on art and prayer and sanity. These aren't S.M.A.R.T. yet; they're a little discombobulated and unfinished, sort of like me right now; but here's what I want to work on in the coming months:
I want peace, hope, beauty, and love for you in the coming year. Thanks for reading.

Email ThisBlogThis!Share to TwitterShare to FacebookShare to Pinterest
Labels: rest, stuff about me