Creative Discombobulation and other stories

It's been a quiet week, and I have spent it in a state of discombobulation. The sort of thing where you pick up task A, and something about it reminds you of task B, so you start on that, but then task C waves at you from the corner of the room, and next thing you know you're on F but A still isn't done.

It's a creative state—I have to give it that. All of a sudden there are marsh creatures in my first novel. I never thought of putting them in there before.

The garden has had a more difficult week than I have. Only three of my spinach plants ever came up. The cherry tree went from perfectly healthy to one of the branches dying part way back, and I can't tell why: 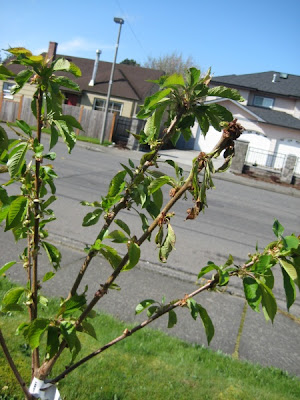 Two of the basil starts keeled over yesterday (now all of them are sitting on the back deck, getting the sunlight they're starved for), and I discovered aphids on one of my rooting currant bushes. I loathe aphids, and am currently trying to drown them.

On the bright side, we have tulips. 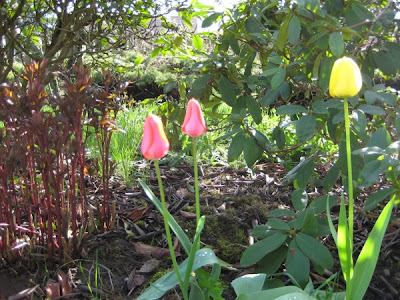 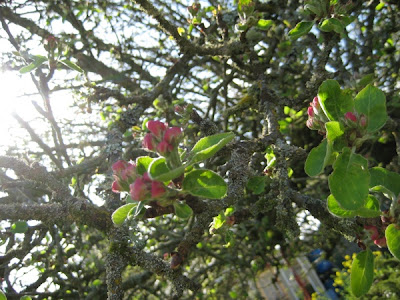 Also, I have rescued the poor choked peony from the lawn, although the lawn is not about to give up that easily.

The rest of the peonies are a foot high, not four inches, but I have hope that this long-suffering one will survive. And that I will find a way to kill the grass without killing the peony. Optimism forever!

Maia, regally pleased to have her people home in the evenings again, has had a cuddly week. When Lou works at his computer, she curls up on his lap or on the table at his elbow. When I'm playing the keyboard, she'll hop into my lap, settle comfortably, and sink in her claws to keep herself from sliding off. It's really quite adorable, although sudden needle-claws in the leg are not at all helpful to piano technique.

Writers' link of the week: Here's an old series of Brian Jacques videos, which are a lot of fun. He's talking to children, but the enthusiasm is inspiring.

Music of the week: When I was growing up in Montana, every young girl who had ever taken a piano lesson knew two pieces: Beethoven's 'Für Elise' and 'Jessica's Theme (Breaking in the Colt)' from The Man from Snowy River. I haven't played the latter often since the late 90's, and lost the sheet music long before that, but this week I made an attempt on the piece and, to my amazement, I remembered it.

Although, listening to this young girl play it, I suspect I never counted it off properly, and that the several dozen times I saw that movie did not serve to correct my freeform timing.

Random amusement of the week: Tall Girl Problems. I read every last one, and cried laughing at some of them. At 5'11", I've experienced a significant number of them. Here are a couple of teasers:

It's a sunny afternoon after several days of heavy rain, the house is clean, and I've had my coffee. Now I'm off for lunch and piano practice and—since I'm fully awake for the first time this week—some writing time, in which I make sure I didn't introduce any major issues into my novel with the marsh creatures.