Christmas Decorating 2008 and other stories

My knee hurts. I just pulled off a spectacular wipe-out on the kitchen floor--full-body impact--due to an unfortunate combination of fuzzy socks and linoleum. The negative part of being as tall as I am (well, this and towering over half of the men on the planet and almost all women) is how far one has to fall.
The fuzzy socks were a necessity today; it's very, very cold. But that's part of a longer story.
* * *
Christmas decorating, for Lou and I, began last Sunday with my parents. My whole immediate family was there, and we succeeded beautifully at the usual ornament-packed tree and not so well with the chocolate donuts (we couldn't find the original recipe and the new one just wasn't as good.) I missed the usual stuffed-snowball fight. This made me feel sorry for myself, but Lou did stuff one of those snowballs down my shirt, so I didn't completely lose the experience.
Decorating continued with a busy Thursday and Friday at work, and our department has now won the company Christmas decorating competition for the fourth year running. We win because we don't think it's half so much fun if we aren't part of the decorations. This year our theme was "Night at the Christmas Museum" and my responsibilities included calling the manager on his cell phone so he could pick it up and say "Buddy the Elf! What's your favorite color?", dancing to the Linus and Lucy theme in the Charlie Brown Christmas exhibit, and leading the angel choir that sang from the loft as the judges looked on my team leader and her new baby dressed up as Mary and Jesus.
The winning department was announced at the Christmas party last night in Ferndale. Lou and I sang in the company choir there, me in the soprano section and he with the basses. The choir is one of the highlights of my year. Our closing number was a medley that started with Vivaldi's Gloria and ended in the last part of the Hallelujah chorus.
I had planned to wear my short-sleeved black cocktail dress to the party, but it was getting so cold out that I changed my mind and wore a glittery red shirt and ankle-length black wool skirt. This proved to be a wiser decision than I could have expected. We arrived an hour early to practice, and the growing wind held an uproarious little gala in my carefully-arranged hair. When we left four hours later, the wind was driving powdery snow in sharp, white, level horizontal lines across the parking lot.
Usually the worst of the weather can be found north of the Bellingham airport, but when we got south of that exit on the freeway, the raise in temperature and slackened winds meant bigger flakes and more snow sticking to the road. We passed at least one car in the ditch as we neared town, and the road got more and more slippery.
We went straight to Mom and Dad St. Hilaire's, planning to decorate the tree at their house since Andy and Lindsey were in town. They live in a somewhat more level part of town than we do, but it was still challenging getting there and we did bounce off a curb at one point. Andy and Lindsey, coming from a wedding in another part of town, must have had some major protection by guardian angels; they hit a patch of ice and slid into another car that had spun out from the same patch. When we arrived at Lou's parents', Andy and Lindsey had just arrived and Lindsey was almost in tears. I'm sure the full story will go up on their blog, but the short form is that the other driver had been crazy enough to get out of her car and had only just gotten back in; had they been a few seconds earlier, their car would have pinned her to hers.
Mom and Dad S. invited us to stay the night. Lindsey begged us not to go, and neither of us particularly wanted to try the route home before it got good and sanded down, so we decorated the St. Hilaire tree and had a fun impromptu slumber party. Mom and Dad provided us with everything from warm pajamas to new toothbrushes. The howling wind made everything seem colder, so Lou and I, staying in his siblings' old bedroom, instead of sleeping in twin beds like in 1960s TV shows, and instead of pushing a couple of those beds together, climbed into one twin bed. We slept in awhile this morning, had a comfort-food breakfast--sausage souffle, English muffins with sorghum and marshmallow fruit salad--and went to church together in the icy sunshine, and Lou and I finally headed home on sanded streets.
This afternoon I took a nap and Lou wrote a letter to the editor, and then we decorated our own first Christmas tree: 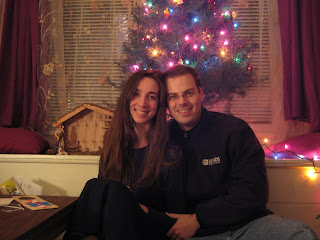 We had a great time putting up the decorations, he taking the traditionally male role of stringing the lights and me unwrapping the ornaments and setting them out as both of our moms do. Starting our own traditions is all the more fun because we're drawing them from his family's, my family's, or both. And it felt good to be quiet and homey together; the fitting end to a happy and adventurous weekend.

Posted by Jenna St.Hilaire at 5:55 PM

Email ThisBlogThis!Share to TwitterShare to FacebookShare to Pinterest
Labels: stuff about me